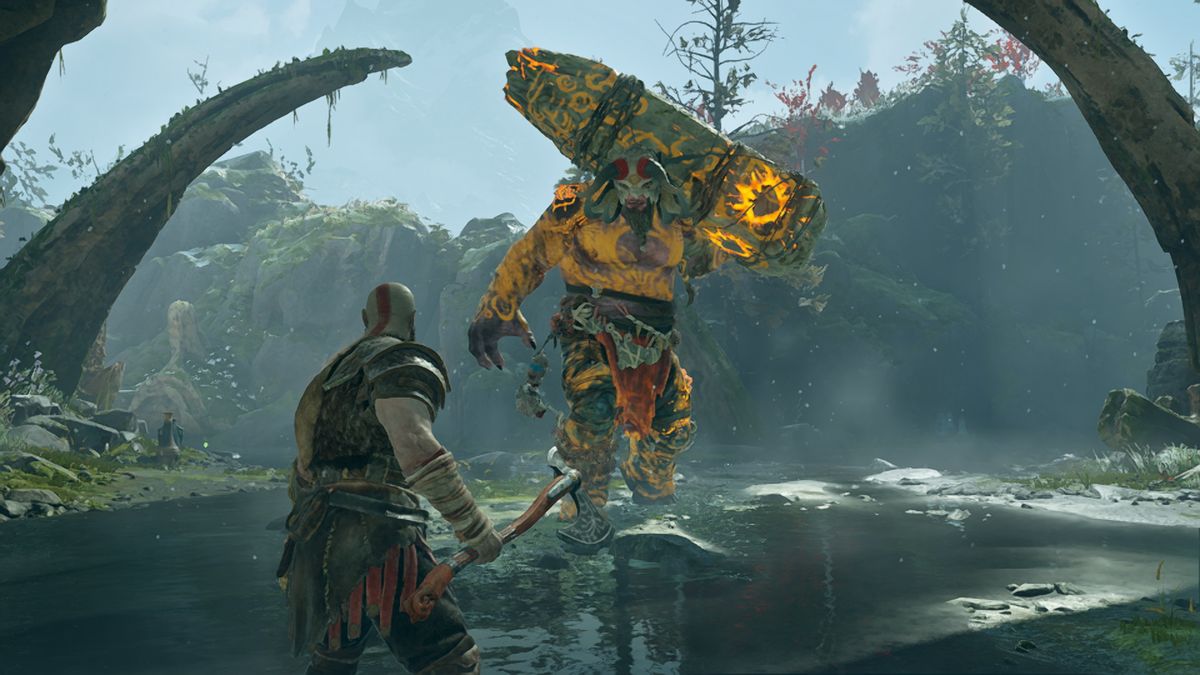 God of War is finally coming to PC and spoilers: it’s a decent game that enjoys a solid port on our platform of choice. It looks good, plays well, and doesn’t seem to have the nasty hangover from its Playstation origins. If you want to tune performance to achieve the perfect balance between frame rate and looks, check out our guide to the best settings for God of War.

The plan here is to see how Ares works on integrated graphics, specifically AMD’s Ryzen 7 5700G. This is AMD’s latest APU, and while $359 is a bit pricey, it’s currently the best option for anyone who wants to play games without having to grab a graphics card — which is all too true in an age of chip scarcity. In addition to being a decent 8-core 16-thread CPU on its own, you get 512 GCN cores running at 2GHz, which isn’t bad for gaming as well.

One thing you’ll need to do before adding God of War to your 5700G machine, though, is first go into your BIOS to tidy up your VRAM settings. Some games grab as much memory as they want and only use AMD’s unified memory access, but that’s not the case with God of War, which has only 512MB of VRAM by default. The game is still running, thanks to Sony Santa Monica, but it looks bad, and not the way it looks.

To fix this, you must go into the BIOS and explicitly set the size of the VRAM. 4GB should be enough for most games, but make sure you’re not stealing too much system RAM or you’ll run into other issues. On a 16GB system, 4GB is fine, but if you only have 8GB of RAM in total, you might want to stop at 2GB. The screen where you change it depends on your motherboard, so check the website for more info. On ASRock B550M-HDV, the screen is hidden in the Advanced > AMD CBS > NBIO > GFX Configuration screen.

Now that it’s done, it’s time to see what the 5700G can do with Ares. At native settings and 1080p, you’re seeing a nice but slow 19fps, which isn’t really playable, or an enjoyable experience, especially in combat. Pulling down to low graphics settings improves performance, up to 23fps, but it’s still not very smooth.

A compromise needs to be made.

Ares supports both options on the 5700G and can help here. The first is controlled by the Render Scale slider at the bottom of the Display Settings screen. Setting it to the lowest option of 50% renders the game at 960 x 540, which is then roughly upscaled to the screen’s native resolution of 1920 x 1080. The result is blocky, however, you’ll enjoy almost double the frame rate at 43fps.

A better option is to use FidelityFX Super Resolution, which renders again to a lower target resolution, but then uses smart upscaling techniques to produce a better overall image. It can be a bit blurry depending on the settings you choose, but you’ll see a similar frame rate to rendering to that resolution anyway. For example, selecting the “Performance” option will render to the same 960 x 540 as the minimum render scale setting, but it looks much better and manages to hit roughly the same frame rate at 42fps while doing its magic.

You might be tempted to go back to the original graphics settings, with FSR set to performance, but going back to 30fps might be a bit much. A better option would be to set the FSR to Balanced, as this will drop the frame rate down to 38fps, but it does look better thanks to the higher rendering resolution of 1130 x 636. In fact, you can try Quality and High Quality as well, although as expected, the performance goes further and further.

For a playable experience, you’d better stick to low graphics settings and FSR performance or FSR balance. This way you can enjoy the battle of God of War while enjoying the view.