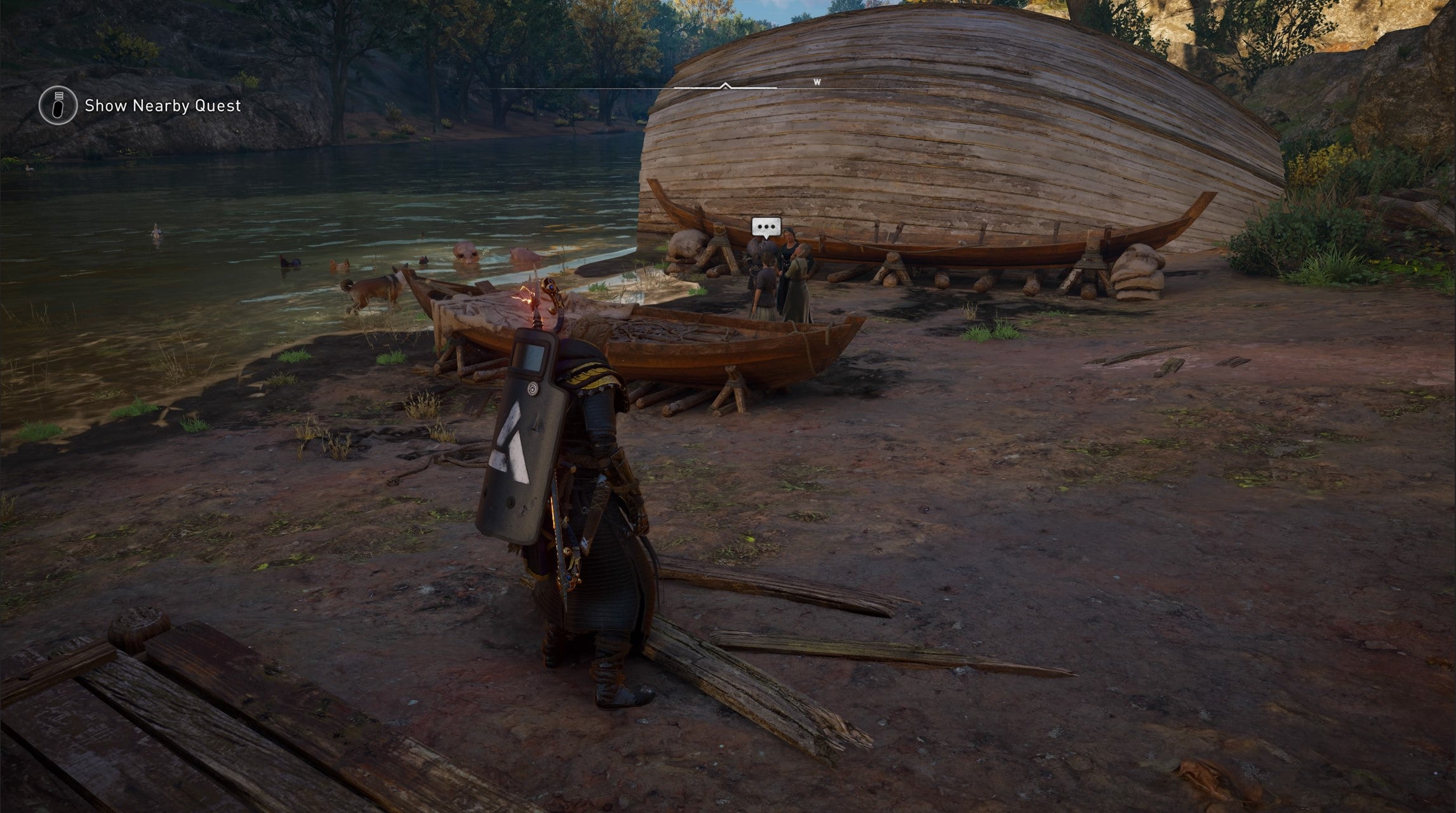 new Assassin’s Creed Valhalla Yes Tomb of the Fallen, The final resting place of some of Britain’s most legendary heroes is waiting for you to plunder.

To start using the Tomb of the Fallen, go to Ravensthorpe east side And talk to the crowd next to the water animals.

They will tell you that there is a mysterious symbol on the other side of the river: here you can find the tomb of the first fallen.

Inside the tomb, follow the passage until you reach a cave with two pressure plates.

On the left side, climb up the ledge, pull the lever, and then bring the assigned equipment to the first pressure plate.

On the right side, shoot the plank, and then slide the whole onto the second pressure plate. In the main room, approach the huge tablet and remove the key from the table.

Turning and looking to the right, there is a door that can be opened.

Pass, avoid the trap, at the end of the tunnel, you will find the first part of the new suit.

To go to the Tomb of Budika, go to Elmonham near the river bank in the north of East Anglia.

Enter the cave and follow the path to the puzzle room.

Immediately on your left, shoot the plank, and then slide the whole onto the pressure plate.

Next, on the other side of the room, climb up the ledge on the left, turn the crank in front of you, and then push the boulder to the front to avoid the trap.

Now jump over the crack to another part of the grave.

On the left, run along the path to shoot the plank, then roll through the spiked tunnel on the other side.

Go ahead and pull the lever in front of you to grab the pressure plate trigger.

Look to the left, and then go around the back of the lever you just pulled.

Then finally throw the pressure plate trigger on the stalagmite.

Just behind you, there is a big rock, you can slide over the stalagmites and grab the pressure plate trigger again.

On the other side, look up at the plank above, then stand on the crate on your right and throw the pressure plate trigger onto the ledge.

Finally, on the other side of the room, slide down the bank, and then pull the lever to grab the platen trigger.

Slide under the gap, and then sprint through the gas-filled tunnel. On the other side, walk up the path, and when you can no longer go forward, throw the trigger up onto the ledge.

Next, stand on the cage in the distance and it will drop until you can jump back to the central room. Return to the right and place the last pressure plate trigger.

To cross the last gap, look down at the gap and jump onto the wooden platform. Pick up the rock and throw it away, then use another drop platform to jump over.

In the tomb, plunder two boxes and then break the box on the right, slide under the gap, and then grab the tomb fragment from the end of the passage.

You can find the tomb of Cassivellaunus in the northeast of Sciropscire, just south of the port on the northern border with Snotinghamscire.

Again, follow the path into the tomb, then dive into the water at the end and control the boat.

In the puzzle area, look to the right first, then go through the crack in the wall.

On the other side, pull the lever to trigger the pressure plate, and then carefully jump onto the floating object in the water.

Go to the floating platform and use the triangle or Y to pull the trigger. Hit the hanging net, and then pick up the pressure plate trigger again.

Enter the second part of the puzzle until you reach another floating platform.

Pull the trigger again, then shoot the platform in front of you and continue. Follow the path up and around, then set the trigger at the top.

Approach the block blocking the exit and shoot the clasp that holds it. Pick up the pressure plate trigger again and jump over the hole, then move the bottom shelf back to the central room.

On the other side of the tomb, ran across the log and platform, then dived into the water, swimming under the tunnel on the left.

Climb up the ladder in front of you, then throw two rocks into the suspended cage in the middle of the scaffolding.

To complete the one on the right, shoot the plank under the waterfall and slide the boulder onto the plate.

Then on the left, look for the waterwheel to the left of the locked door.

Jump along the line next to it and you will find a path through the wall that leads to a crack in the wall behind the locked door.

Shoot down the plank above you, then slide the shelf away from the door.

To open the door, climb on one of the shelves and remove the key from the ceiling. Now slide the boulder into the central room and enter the last room.

Loot the gold box and continue to enter the room through another exit. Take the elevator to the top, then walk a tightrope to the side of the cave.

Use the zip line, but descend from half to the water below.

Descend to the bottom of the cave where you find yourself, where you will find the second tomb fragment.

From the entrance, keep going until you reach the large open puzzle room.

The eagle swooped down from the entrance, and then went all the way to the icy gully on the left.

In the side chamber, you will find a lever for distributing the pressure plate trigger.

Go back to the hay where you dived, then pull the trigger and move the big rock to the front of the inclined cart.

Turn around and jump over the suspended platform to the central pillar. When you can’t climb higher, throw the pressure plate trigger upward, then climb up to grab it again.

After plugging in the socket, walk forward and shoot the box, sliding the boulder in the middle onto the central pressure plate.

You should adjust the platform on the right to get an angle, but you can squeeze an arrow at the position of the screenshot we showed to skip it.

Run across the bridge and walk along the passage until you reach a locked door. Slide under the gap to the right of it, then go through the hole in the wall, and follow a straight path through the cave.

Once you reach the floating platform, quickly shoot the block blocking the locked door that you passed through, then go back to that door and go through it.

On the other side, continue until you find a boulder to hold down the pressure plate.

Push it until you can no longer enter the room on the right. Climb up the pillar, then push the big rock onto the cage.

This opens the way for monolithic applications. Push it until you can no longer push it, then look up and look to the left at a ladder that can be shot down.

Use the boulder to climb the ladder and interact with the wheels to unlock the last door. Now you can push the whole until you reach the pressure plate in the central chamber.

Next, move to the right and lower the suspension bridge as before.

In the cold room where you find yourself, go crazy and destroy all the ice barriers around the room. Grab the exploded jar from the right side of the room behind the wooden planks and slide it to the upper right corner under the hole in the top wall.

Use the explosive can to open the crumbling wall in the distance of the next room, and then go up the stairs on the right.

Smash the obstacles in this room until you find a hole that leads to under the floor.

Go in, then walk along the passage, avoid the traps, and reach the key on the last altar.

Return to the room where you blew up the crumbling wall and open the locked door, then slide the boulder behind all the way into the central room to reach the last tomb.

When you slide the boulder back, in a room with building blocks on the floor, lean to the left first, then tilt to the right, otherwise you will run into a dead end.

After you ransack the last tomb, follow the exit until you reach a zipline and then descend into the cave below.

On the left wall, shoot the ice cube, inside you will find the last fragment of the tomb.

That’s all for now-obviously you will be able to use the artifacts you found in the grave to continue the story in future updates, but all you can do now is wait for the next part.

For more information about Eivor’s adventures, check out our list of Assassin’s Creed Valhalla guides.

Or, if you are using DLC, here is all the information you need to know about the mission of the Paris Rebels.