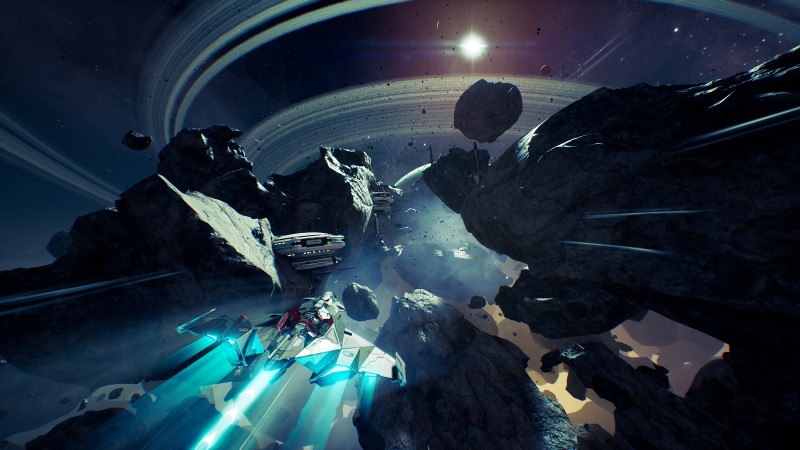 Chorus is a frantic barrage of laser beams, missiles and impossible space combat dodges, boosts and chases. At its worst, it gets bogged down in tiresome and repetitive encounters, frustrating checkpoints, and tedious characters. Sci-fi space combat shooters are a niche genre today, so while I’m thankful for the chorus, much of the game is relatively linear and mundane, with some epic encounters from time to time that live up to the galactic fantasy.

As Nara, you’re a starfighter pilot with an incredibly twisted past. The story is fairly cliché and sometimes sluggish, but the chorus doesn’t ride on its otherworldly tale. No, Chorus is about gameplay, and when it works, it succeeds. Excellent sequences play out almost like a movie, where we can zoom in on the battlefield with the ability to dodge deadly explosions left and right, and unleash heavy fire on capital starships.Take down a massive enemy ship piece by piece, get rid of its outer defenses, rip its inner core down with an explosion, and some huge star wars It resonates when you zoom in on the top of the craft that blows up the generators under heavy fire. Other highlights include parts where you jump through dimensions to hunt down enemy ships or destroy galactic space entities. Likewise, the unlockable ability known as Ritual in Chorus definitely shines, giving players quite a few tools to make combat more interesting as the game progresses. With Ritual, your options are greatly expanded, from being able to teleport behind your enemies for easy attacks, or even pushing yourself through enemies to rip them apart.

Chorus suffers in standard fight-to-fight moments. While it has some light elements of an open world where you can perform additional loot quests, the journey is relatively simple and, unfortunately, monotonous. Outside of great fights, encounters are very similar and often contain elements that add to the drudgery. For example, one mission requires the player to rescue several allies from enemy fire and destroy an enemy ship. If you get blown up at any point during the mission, it goes back to the beginning to restart the entire process, including mini-cut scenes and chatter. This mission structure is common in Chorus, which is a hard-to-swallow asteroid.

It’s no big deal if all enemy starfighters are shot down in a few rounds, but combat is usually an elaborate dance of teleportation, dodging, weapon swaps, and more. After losing several times in the same battle, my energy to keep going was often drained. Encounters that are timed or involve protecting allies are almost always frustrating, as you may be pulled back to checkpoints and just have to fight the same enemies over and over again until you’re done fighting. You may fight several ships at once and be forced to take evasive action, but the NPC you swore to protect goes down while you’re busy. When a battle involves many units to protect, it can take a lot of effort and ability synergy to survive, and it can be very frustrating to be sent back to the start of a mission due to a timer or ally dead. These problems are exacerbated by the stripping of the space zone into a series of similar battles, where I am desperately searching for the next big moment to keep my will to keep ignited. It doesn’t help that Nara is constantly muttering to herself in some weird ASMR form, but since the entire pack is gameplay-dependent, Nara’s idiosyncrasies aren’t such a big deal.

Chorus has some epic battles that live up to the fantasy of space combat, but the rote and often arduous path to them is a difficult route charted through the stars.