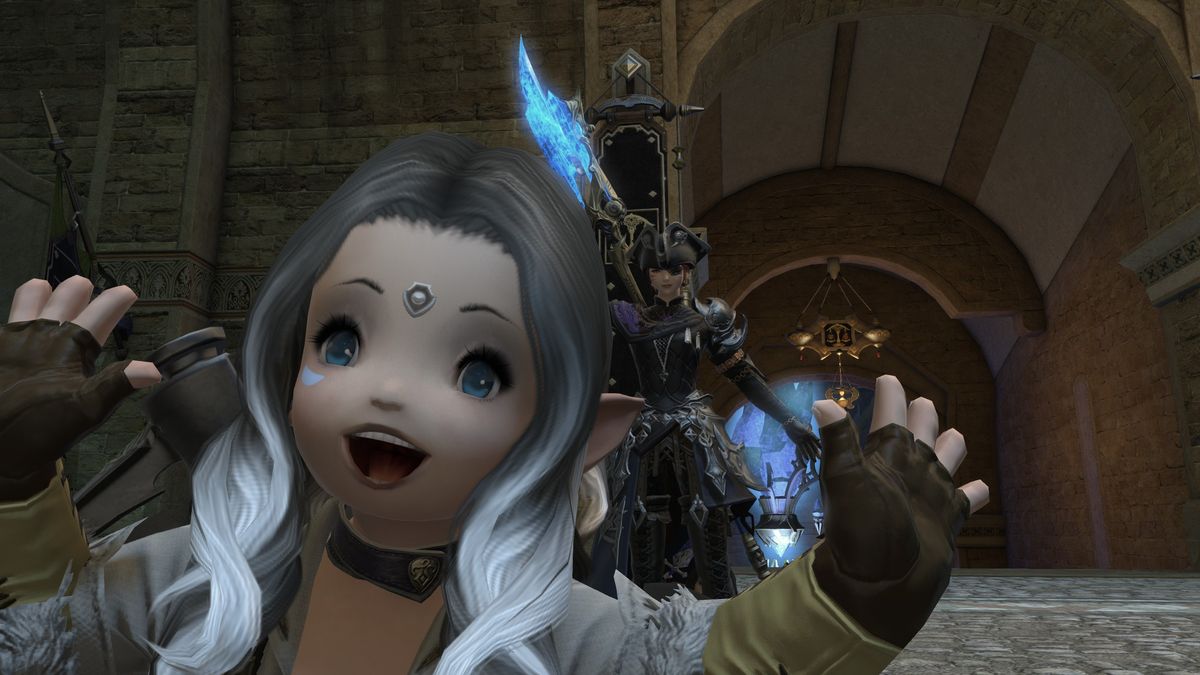 What is it? The latest expansion of MMO ends a long-running storyline.

For “Final Fantasy 14: Terminator”, the word “expansion” feels too small. Not only is it a full-length JRPG that takes at least 50 hours to pass, but it is also the culmination of a storyline that has been running for more than 10 years. I and millions of other players have been following this story update and expansion. It is not just an add-on, it feels more like the last book in a long-term fantasy series.

So, to solve the big problem-yes, Endwalker is a wonderful gift to the Hydaelyn/Zodiark legend (two ancient creatures locked in a conflict of light and darkness involving many crystals-fans of Final Fantasy know the exercise), It celebrates all this before; yes, it opens the door to the new adventure we know is taking place.

Listen to my story

However, when tying things up, things get a little messy. Although its running time is about the same as the previous massive expansion, it feels like there are more stories than usual, good or bad. When your heroes and the descendants of the Seventh Dawn fight to overcome the “last days” of the end of the world, they deal with various seemingly climatic threats and dispatch a bunch of villains while swiftly moving between distant areas Move (you go to the moon, after all). It almost feels like this plot can be thrown in two or three expansions.

The things here may be rich, but not always strong. The moments that occurred in the ruins of the suddenly turbulent Garlemald-the empire has been hunting down our Eorzean friends for some time-are unforgettable, but insignificant. The once powerful empire is now in ruins, filled with distressed people, citizens caught in cruel supernatural disasters, but it has not received the attention it deserves. The same is true for the vibrant and colorful Thavnair, which is the first time we have visited a South Asian style land here. When the fiery plague begins to sweep the earth, first on the cutting board, it seeps into small tragedies, giving the MMO some of the toughest moments to fight. In the lush jungle and ancient ruins, only a few characters can speak and draw well enough. I hope I can learn more about them, but there is just not enough time to shine in this ambitious career.

Rather than making it feel like an anthology, it eventually introduces problems, such as the lack of any really clear villains (about two-thirds of the real ultimate boss we met for the first time), and the sudden emergence of narrative conceit to guide you Briskly cross the roller coaster, and then wrap yourself up. It may be fun, but the roller coaster is still on the track. It’s a pity, because small moments are great. Those who have played from the beginning will clenched their fists, because even a relatively small character will shine for a while-even if it feels like it has three separate “and my axe” moments, allies blink and nod.

The last expansion of Shadowbringers as an independent story in the new world is pleasant, and Endwalker promises to give all time under the crumbling star, which is both its greatest victory and sometimes its weakness. Although anyone who does this step may have a big smile on his face. If you haven’t played the rest of the story so far, don’t use story skip-if you have completed the complete journey, you will get a greater return.

Stripped of emotional and sometimes very bleak stories (after all, the apocalypse is often a bit risky), Endwalker provides the expected content. The new headlines include two new jobs: Physical DPS Reaper and Healer Sage (also the first new job in a few years). Then, you can put these new or old jobs at their pace through six new story dungeons, two additional endgames, and three trials (large-scale boss battles). There are still many places worth exploring. There are six new maps to explore, and two new cities for the latest players to hang out: Thavnair’s Radz-At-Han and the Greek-style Old Sharlayan (full of sultry centrist scholars), two They are quite extensive.

All these new additions represent the peak of the FF14 development team. Both of these tasks are very interesting, and since MMO allows all users to switch tasks directly from their inventory, anyone can easily jump in. The reaper rotates the sickle when you fill up a few meters to enhance your own death personification. At the same time, Sage uses the robotic scalpel not only to heal monsters, but also to erect barriers and explode lasers on monsters. At the same time, it also uses a small mechanical switch to change the mode of some of your abilities, for example, click to explode Become a kind of damage over time. It feels very active. However, as usual, these start with a slightly lower level than the main mission (this time 70 vs. 80), which means that if you want to bring them into your journey, it will take some time. You will need 7 to 8 hours to upgrade, which does not seem to be too long in terms of MMO-but when you can’t wait to take your sage on a new big journey, even this can be a chore .

It’s debatable that there is a third new job in Summoner. It has undergone major reforms. The cute minions have come out, and bigger buddies have come in, because you can now directly call Primals (Traditional Summoning of FF14). Version) power, which is gorgeous when they run rampant and take up a lot of screen space.

Every job has been adjusted, but it’s not just the addition of new content. Old skills have been trimmed to make way for new skills, and as usual, it’s all done cleverly in a way that prevents things from becoming overwhelming. My main job, Dragoons, has abandoned a maintenance action in favor of automating it, and added a new regional effect terminator to make it more closely integrated with other action sets. As far as space is concerned, the neutral change to my standard shortcut bar feels deliberate. It is particularly useful when using the controller, and it continues to be superbly supported by the crossbar system, allowing easy access to three or four bars via touch triggers. It is great to see the promise of alternative gaming methods continue.

Similarly, handicrafts and gathering have also been hit hard. Always a fun and deeper pastime than expected, these subjects still feel a little bloated. High-quality materials have completely disappeared from the game to reduce the need to occupy multiple inventory slots, but everything has become more streamlined. The past tasks and skills have also been changed to explain their lack. This is a daunting task and it feels like it has paid off, because those who are good at hands-on are ready to play with a lot of new equipment launched by Endwalker.

The same concept can be seen in dungeons and trials. You can either go to parties or join AI allies. The MMO mechanism has never been so readable, so whether in the dungeon itself or in greater destruction, boss battles are thrilling. Everyone has some great mechanics that make the game feel unique while also maintaining fairness. Whether it’s a snowy behemoth hiding in a blizzard, and then suddenly appearing and attacking most of the arena, you can track someone through its footprints in the snow, or fiddling where you stand to avoid a series of deadly butterflies and wings exploding All of a sudden, it feels fun to complete your movements while dancing around their attacks. Some classic telegrams have even been expanded, and the “tank destroyer” now receives a special red arrow, indicating that your team’s buff partner is being defeated.

The trust also feels better than ever. This recently added feature means that you can take the NPC to complete the story alone instead of queuing up with your friends for the story content. They are also very capable, so if you finally wipe, there is no excuse-and it can be a good tool for learning Boss mechanics. They even added color to the story when joking back and forth. I usually communicate with players for the first time, but there is an example that makes me very shocked by how the characters approach their mission, I just need to see how it works. I was not disappointed.

The responsibilities of single player games are also back, allowing you to have your own positioning moment, sometimes as your own role, and sometimes from the standpoint of an ally (if you fail once, now provide easier difficulties). These feelings are not as spectacular as those in Shadowbringers, but provide some surprisingly effective rhythm changes and unique storytelling skills while allowing you to maintain control of the action. Sankrid’s stealth mission is not Metal Gear, but better than it has any rights. The other forces you to play a much weaker role than usual, which really makes you think about which battles to fight and which fights to avoid.

Some of this creativity is reflected in the main task, with more emphasis on letting you live in the moment, rather than always jumping between task markers. Allies now sometimes join you when you are walking around, and you can take a break in certain places and have some optional chats (no different from the skit system of the story series, but much more limited). Less successful are the trailing tasks, which, despite their small number, are as annoying as any trailing system.

What’s impressive is that even after so many years, the team was still able to adopt the decorations of FF14 and crystallize them into new forms, from work and dungeons that felt they were the best way in their history, to when they were experimenting. The relationship between confidence gameplay and storytelling. However, although there are some amazing vistas and lighting effects, and the details of the new armor design are fascinating, the era of core games can’t help but show up, and the play is very smooth. This is the last chapter of a great story, I will stick to it, I am very happy to see the team tell a new story-but I am eager for some bigger changes, when they do, it can shake Iozea .