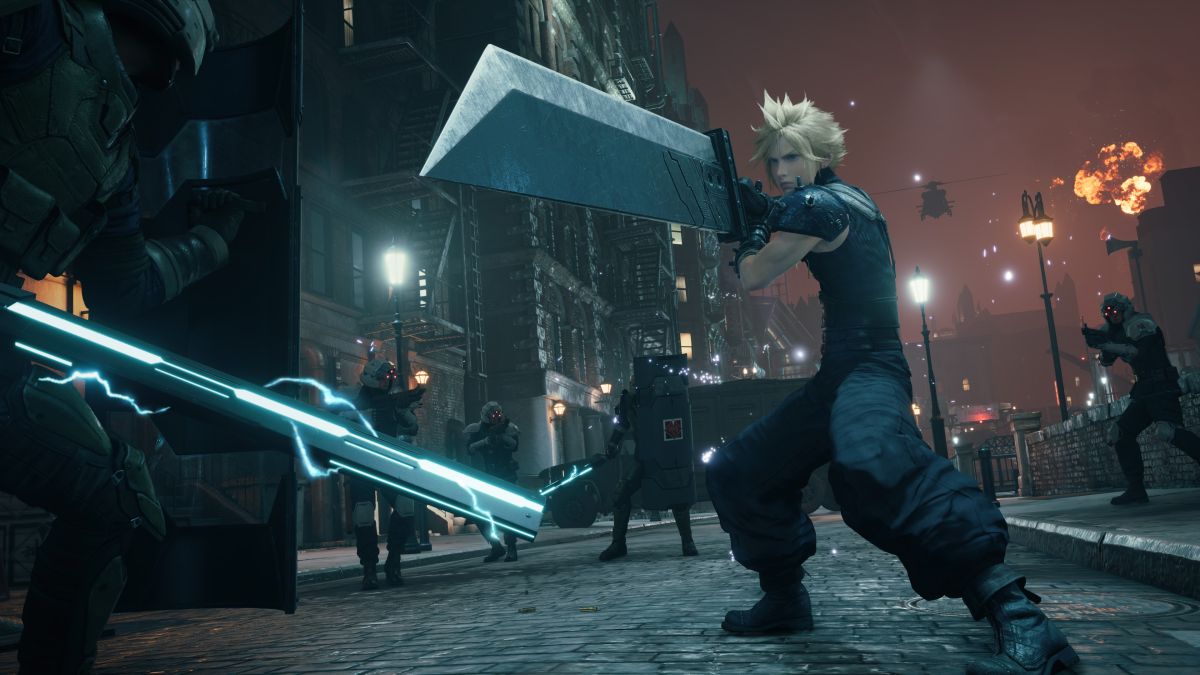 It’s always a bit embarrassing to see adult adults becoming big and angry babies because they adapt or transform their favorites, as if the things they love have been destroyed in some way in the process. Of course, I only react to things accordingly. Obviously, except for the “Final Fantasy 7 Remake” launched on consoles last year and the game launched on PC today. It broke into my home and occupied a huge, steaming dump in my childhood-it must be a crime. Yes, now I am that big and angry baby.

For a while, Final Fantasy 7 was the best game I have ever played. I don’t even think it is the best Final Fantasy of the day, but it is still very special for a long time-the first one I really fell into is also the rare JRPG I have really completed. But when I think back to this precious time of my childhood, I now only remember the anger when I played Remake last year and the relief I felt when I finally finished it.

At the beginning of my adventure through the formidable city of Midgar, I was fascinated. Technology has caught up with the original team’s vision, and finally gave us a tangible city and a role that doesn’t look like a Kinder Egg. Of course, the background of Final Fantasy 7 looks great, but this Midgar rendition feels energetic, rather than a beautiful artwork with some silly-looking characters pasted on it.

I am even more happy to see characters like Jessie get their due rewards, and everyone benefits from the new voice acting and modern animation. Although the original small block character model does have its charm, Remake is much more expressive. Then there is the Honey Bee Inn section, which now celebrates the abolition of gender norms instead of making fun of Cloud for wearing a skirt. This boy is a hot girl, looks so beautiful in a dress, and deserves respect.

But even if I enjoy myself, I am less and less enthusiastic about participating in another battle. Undeniably, the Remake footage looks gorgeous and interesting, but participating in it is like trying to compete for the battle system from three different games at the same time. When trying to do everything, it has no effect, and I have never been inspired to master it-I am just confused.

The original turn-based combat has never set the standard very high, so I would not call this change a huge loss, but Remake’s combat system allows me to put down my controller and find many other pastimes. This broke the rhythm of the game. I just can’t get into my best condition, and this embarrassment is exacerbated by every battle.

With the development of JRPG, Remake is not a long game, but it is definitely filled. The side tasks are very rich, but apart from busy work, these tasks have almost no meaning. Square Enix has the opportunity to use them here to establish a stronger connection with Midgar, but it offers nothing other than finding missing kittens or killing random monsters in the scrapyard. People will argue that you can skip them, but what if the next one is really good? FOMO is almost as bad as doing more frustrating housework.

I’m also playing Judgment, a Yakuza derivative product, and it really appears in Remake—almost everywhere, really, but especially when it comes to side missions. Like Yakuza, Judgment’s side story is as valued as the critical path, but Remake feels like an obligation, and only a couple can justify their existence. The rest is used to increase the real full game by a third.

Remake can’t escape the fact that it is not a complete story. Even though I knew I was going to go in, I found it hard not to be disappointed by how clumsy it tried to tie things up-this attempt ended in failure. It must be crazy to play without knowing the original story, because it doesn’t even have a suitable opponent. Of course, there is Shinra, the evil company of Final Fantasy 7, but there are some weaknesses in return: the battle with Vice President Rufus and his magic dog. As soon as Rufus appears, you are caught in a frustrating battle, and then you are over.

This is an empty confrontation, because although you are dealing with Shinra throughout the game, it is mainly through grunts or followers like Reno and Rude. Rufus is just someone you don’t know.

Of course, Sephiroth still exists, but in the story covered by Remake, he is a complete mystery. When you face him in the climax of Remake, there will be a long, dramatic and gorgeous battle, but this is a free time. It came too early, so what was supposed to be a powerful emotional climax became an excuse to show off the epic and beautiful appearance of Remake.

The same is true for the original, it teased Sephiroth while keeping a long distance from him. But at least there you won’t wait years to really figure out what this creepy guy’s deal is. When you break the game like this, it doesn’t work at all.

When it was clear that I was sprinting towards the end, I was in autopilot mode, just trying to pass a series of fierce battles so that I could finally walk away. Remake completely lost me. I can’t let myself care about any of them, because obviously there will be no satisfactory conclusions.

I am worried that Remake will change too much, but it turns out that what it really needs is some more dramatic changes in order to successfully transform it into multiple games. This makes me think of something. Sadly, I must admit that the real reason is that I feel that Remake used to talk nonsense in my childhood: maybe “Final Fantasy 7” is not the case. I now have much less patience for struggling in boring hallways — there is no monopoly in Final Fantasy 13 — or participating in poorly designed mini-games. If I had to go to the gym again, I would cry.

Playing Remake also confronts me with the fact that I really don’t like anyone I have to go out to play in FF7. Claude was never a strong JRPG protagonist, but I think I like some other characters-I don’t like them anymore. Barrett is an exhausting braggart, Alice is pathologically sweet, and most of their opponents are idiots. I still like Tifa, but I think it’s just because I like anyone who will pour me alcohol. Very thirsty Jessie, the character that has evolved the most, is the only character I like unreservedly.

I think there are always risks in remakes. It’s almost impossible to find a truly enduring game, and even positive changes can cause the anger of fans who think their favorites are sacred.

Maybe it is a good thing that my rose-colored glasses are taken off and stepped on. Putting the game on the pedestal doesn’t help, and it’s not surprising that a game design with a quarter century history doesn’t feel good to play today. But I like to have these memories, I miss Avalanche is great, or Cloud’s perseverance is very cool rather than terribly dull.

I hope Square Enix can restore my innocence. Or at least my ignorance.