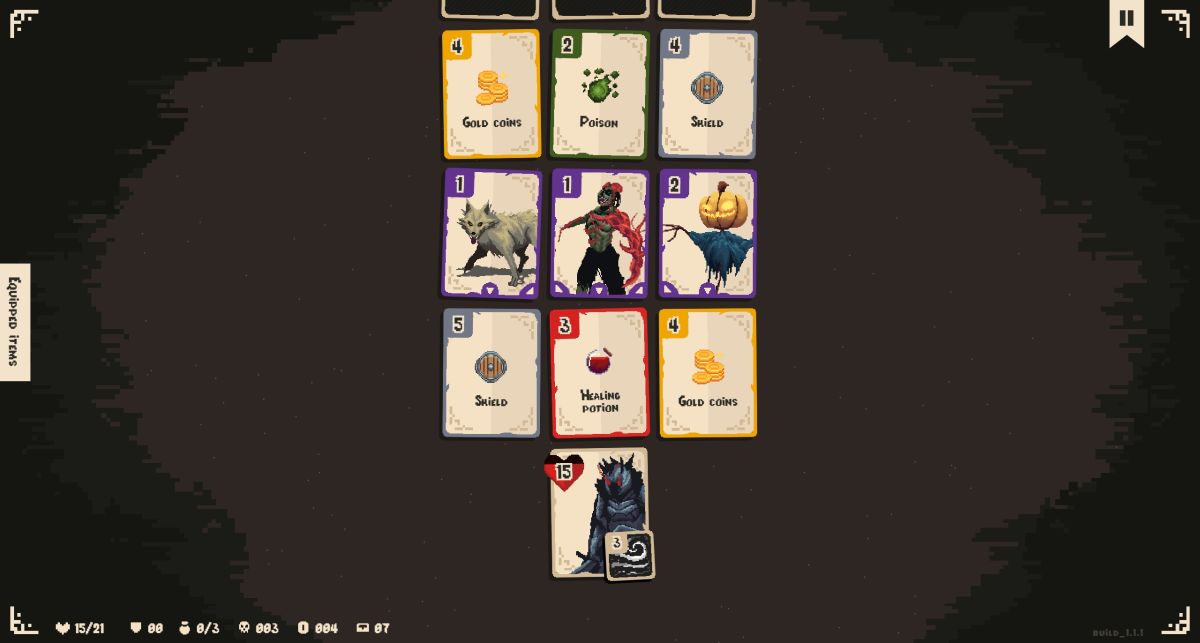 The Fold is a dungeon made up of cards. I can choose between three of them, which might represent monsters to fight, gold to loot, potions to drink, etc. I can see a few rows further out, though, where there are more monsters and maybe a pool of poison or a shield that enhances my armor.

Since I can only select from cards adjacent to the one I’m currently on, if I select the middle card from the next row, I keep all three options, but if I turn left or right the selection shrinks to two. If I move to a card below the monster, they will leave their position to attack, finding whatever is below them.

Forward: Escape the Fold is a constant stream of tiny decisions. Picking up this pile of five gold coins means being attacked by a long-toothed purple worm, but then you can reach the merchant’s treasure chest and buy new items. Get this shield plus 4 armor and get hit by a giant squid that deals 3 damage, or drink this healing potion for 3 health and get hit by a salamander that deals 1 damage. The selection of snack sizes is endless.

Sometimes the fold narrows down to two or only one choice, and each level ends with the inevitable card, the death god or the giant scorpion or some other boss crouching. Combat is simple: monsters have a damage number, you subtract your armor, and whatever’s left is removed from your health. If you survive, they will die. This means you can easily do the math and figure out if you’re going to beat the bosses as soon as you see them, making the final moves of each level feel dry and mechanical. You know if you’re going to live or die, and you just get there through movement.

When you die, the game is over. Sometimes you get an achievement that adds new items for future runs, or unlocks characters with different powers (cast by picking up mana potions) and different amounts of health. While each run only took a few minutes, when I was done, I found myself not keen to try again. Maybe Hades has ruined my other roguelikes because I can’t help but feel dead without its reward.

In Hades, every failure moves the story forward and lets you unlock something new. Despite the name, Forward: Escape the Fold doesn’t have that constant forward movement. Not that I’m going to be dubbed or animated, but Escape the Fold does hint at a story and set it through writing, it’s redundant, bosses saying “I’m here to pick you up!” and anything that turns into a forest or a town Dungeon level. It’s all very blurry, leaving only endless choices between gold and shields, scarecrows and wolves. There’s a purity to this that makes it quick and casual enough that you’ll know how you feel about Escape the Fold once you try it.

Forward: Escape the Fold is available at itch.io and steam.