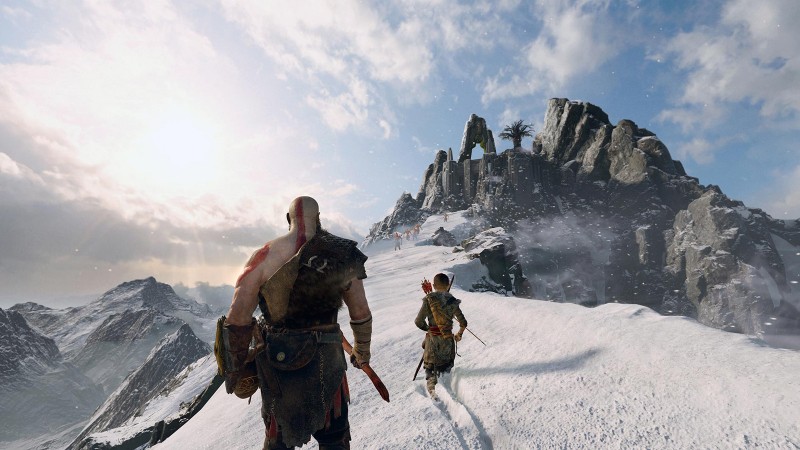 God of War was one of the best games to release in 2018, and it could be one of the best games to release in 2022, as it’s coming to PC right now. To first understand what makes this game so great, be sure to read our original review. To find out what developers think about using a mouse and keyboard to play games, or why they don’t offer mod support, we caught up with Sony Santa Monica’s Creative Director Cory Barlog and Technical Production Senior Manager Matt DeWald.

Let’s cut to the chase. Why do you think people should check out God of War on PC?
Cory Barlog: Because it’s a giant smokescreen selling you the fact that Silent Hill’s secrets are in the game? Totally kidding. Honestly, I think what’s really exciting for us is that new potential audiences who haven’t played the game can experience it and show it off on their powerful machines. I don’t have a 3090 [GeForce graphics card], but I’m sure they all have 3090. And, even if you did, I’ve played it a few times, but playing it on my ultrawide was an awesome experience.

Matt DeWald: We’ve sold close to 20 million copies, like 19.5 million on consoles, and it’s amazing how many people have never played it. If they haven’t played on a console by now, they probably won’t. So that gives them a chance to play it on the platforms they might play on. As Cory mentioned, we added widescreen, and we scaled it up so you could play it in 4K. You can increase the rest of the graphics resolution and really accentuate the look of the content.

Is it easier to beat the Queen of Valkyrie at 60 frames per second or ultrawide or any new technology?
DeWald: Yeah, I mean, it depends on how good you are. But I think having more frames would definitely help with the reaction time. We added Nvidia Reflex, which also reduced some reaction time. I haven’t beat Sigrun yet, so I don’t know. I’ve been trying for four years and I kind of gave up. She owns me.

Looking back, everyone has a vision for a few years now. Do you have any new ideas or insights about God of War?
Barlog: I still have that pain — I don’t want to say trauma, but I really don’t have a better word, so I’m going to say trauma from going through it all. It’s definitely been a very long process, so it’s nice to be able to look back at it from such a distance and really see it clearly and critique everything I’ve done and the decisions I’ve made. I don’t think this will ever stop. Honestly, I’m proud of it, but I keep looking back and doubting all the decisions I’ve made and wondering, “Oh, did I do it right? Am I pushing this smart? I should probably make another decision. .” It’s maddening because I just want to be able to watch it and enjoy it, but I can watch it now and know that new people are going to play it, so I’m happy to see and hear new reactions from people, “I usually don’t Playing console games, you know, I tried the game and was pleasantly surprised.”

Balog: Right? Yes, I definitely don’t want to go back and edit anything. Like putting a flashlight in a soldier’s hand, or making, you know, Greedo shoot first or something, but there’s always that temptation. And I have to hold back because I know it’s not a good thing, at least for me. If there’s something legitimately broken, it’s all about that, let’s go there and fix it, but go into anything else and change it, it feels like doing something like that just takes a different tone. I feel like we always look ahead and say, “Okay, let’s fix this in the next thing. Then let’s look forward to this and do that.” But most of the things we’re going to fix How can we make this look great? How do we provide these features to those who like “I spent five bucks on my PC”. I hope this looks great. “

How much insight do you have on how Sony decided the PC was the market they wanted to bring it to? Is that something you advocated early on?
Barlog: I think it’s the whole studio collectively saying it’s a really good idea. We should investigate this. Ultimately, I think it hits that tipping point. When we send so many suggestion box suggestions, they’re like, “I’m tired of hearing all this. Well, we’ll do it.” It’s a process. As a company and individual studio, we’re still working out how to do that and what the process and strategy will be.

So, do you think we might see Ragnarok on PC four years after the console’s release?
Balog: I don’t know. Now, we play one game at a time, look at each game, and decide, “Okay, is this the best?” We’re going to evaluate how well it works. Do people like it? Are we doing it right? Are we doing something wrong? If we do it again, can we do better in the future? But at the end of the day, it’s Sony’s decision.

How do you feel about the mouse and keyboard controls in God of War?
DeWald: Quite a bit, because we knew right away that on PC, we were going to have to focus on that. We have to figure out what that looks like. One is to build a customizable interface where you can change all the keys. It’s not something that exists on the console. There is a lot of work to be done. But then figure out what the default is? Does that feel natural? One of the learnings we found is that, for example, the traversal pattern you usually do on the console, you press loop. When you jump over things, you raise barricades, you climb over cracks and stuff like that, it’s all just a circle. A PC, we have E for interaction, it’s a very common system, but we found that when we had people test, they always tried to press the space bar to jump over the gap, even though what popped up was to press E, cross For keyboards, the gap to space is more natural. So we have to go back and find all the traversal points that have some kind of jumping mechanism, and add the space option to make it work there as well. It’s not something you do on the console. Right now I have two buttons, E and Space, which both do the same thing. But it is natural for people to do so.

Barlog: I just want to play on my Bongo controller.

This is the real drum of war. Do you guys think it plays nice with a mouse and keyboard, or do you still prefer a controller?
DeWald: I’m actually playing with mouse and keyboard most of the time now because I’ve been working on it for two years and it’s just my default. Playing it on mouse and keyboard feels very natural to me.

Many people use their Xbox controllers to play games on PCs. What do you guys think of people playing God of War with an Xbox controller right now?
DeWald: Great. We even typed all the glyphs for you so you don’t get confused by button presses. Yes, we have no problem with that. You can even use a Switch controller here. You can absolutely use any 3rd party controller. We tried to add as many options as possible, because why limit the people who want to play the game?

How do you feel about people modifying games?
DeWald: Obviously, we’ve all seen things like Yoda as God of War and Grogu as Atreus. I thought it would be interesting to see what people put together. We did not add modding support. It’s not something we develop time to create tools for. Everything we have is custom, so it’s hard to build something like this. But I’m sure some really smart people will do some really cool stuff and we’ll see how it turns out.

Barlog: Yes, when I play on PC, I use the mods that are available. I think it’s cool. very funny. One of the coolest parts of playing PC games is the feeling that others can add or improve it and enhance your experience. GTA and Skyrim are two great examples of games that keep getting better because people are like, “I just wanna try this.” You don’t have that level of interaction on a console, so it’s kind of a Possibility, I think it’s cool. But you know, I’m not really speaking for the rest of the company.

Do you have any plans to add more modding support and make it easier for people to create mods?
DeWald: Not in the plan at the moment, but I mean, anything could happen. Importing our assets from Maya into a game is quite a complex process, so trying to build user friendly tools to do this – took months to train our own artists to do some of these processes – so try to build A tool that is intuitive enough to enable end users to do something like this would be quite a bit of work. In the way we structure our content, the Out tool is very dependent on our process.

Barlog: Our tools are difficult. This is how we roll. We like tools that have difficulty. Our engine wasn’t really built to support this. Our tools are hyper-custom and complex in nature. So I don’t think this might happen in the future, but who knows.

Any final thoughts? What are we missing?
DeWald: The most important thing is that it’s coming soon. I’m just really nervous and excited about what happens when it happens, because there’s a ton of different PC hardware and software permutations out there, and I’d love to see how it works. But we’ve spent a lot of time making sure it’s performant, and I’d love to do that.

Barlog: You guys did a great job. I’m very excited about this.

DeWald: Can you quote him in your article saying we’re doing well?

God of War will release on PC on January 14th. Read our full review of the original PlayStation 4 version or watch our PC version video preview here.