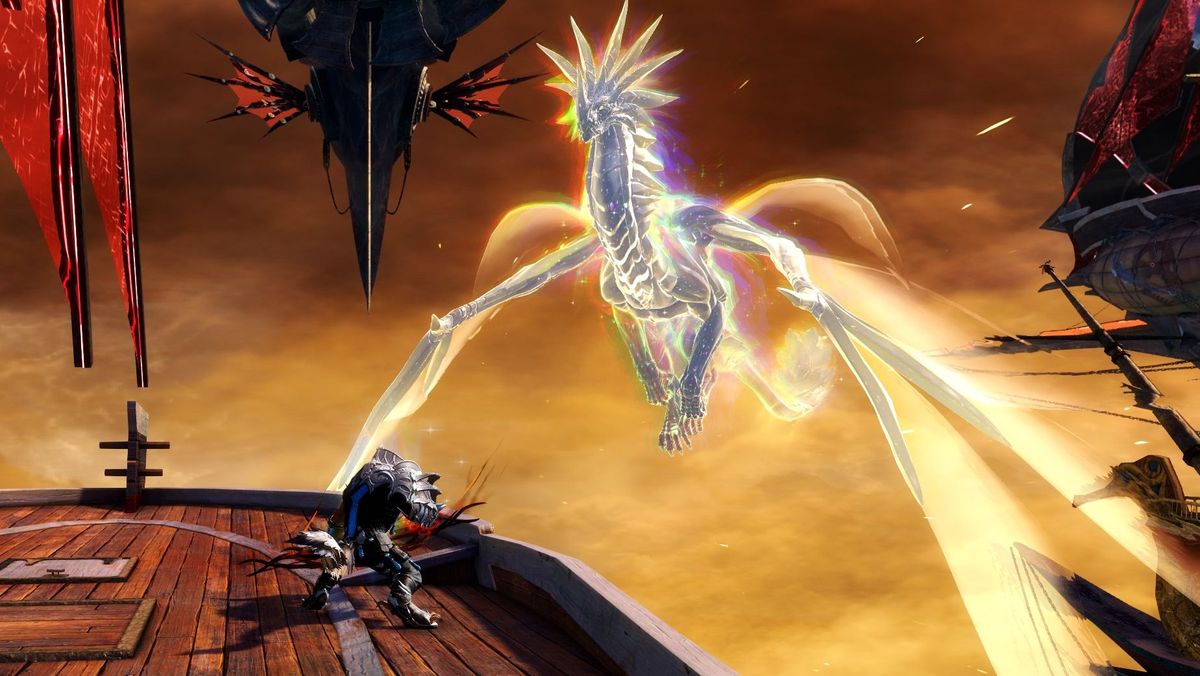 Since End of Dragons was released, I’ve spent as much time on Guild Wars 2’s old maps as I do in the new Canthan region. The new expansion pack does not replace the previous expansion pack, which is a peculiarity of the game. It’s an MMO that hasn’t raised the level cap in the nine years since its release. The gear and weapons you acquired earlier still apply today. In this case, Dragon’s End not only needs to excel in isolation, but – through its new maps, new traits, and class feats – must integrate itself into the larger tapestry of the entire endgame.

Even now, a month after its release, it’s hard to predict what its lasting legacy will be. But one thing’s for sure: The Dragon’s End makes a great first impression.

This campaign is Guild Wars 2’s most powerful campaign to date. In pursuit of a group of sky pirates, players crash into the continent of Kansha – setting off a diplomatic incident that has resulted in the region reopening to the outside world for the first time in hundreds of years. As the vanguard of this new era of trade and tourism, you are quickly drawn into the region’s problems.

Overall, I like what ArenaNet is doing here. Guild Wars 2’s writing has changed over the years, but tends to feel too arched and sarcastic in tone. Instead, it’s lighthearted – a fun adventure even as the story gets darker. Its characters have plenty of room to process their feelings as the events unfold, but deliver it with a lightness. The conclusion isn’t surprising—Dragon’s End isn’t a subtle name in a game in recent years that seems eager to outpace the so far dominant ancient dragon. But the route to that point is often surprising and filled with memorable moments for both new and returning allies.

It’s also more nimble in its presentation, which does a good job of letting players revel in the little moments and the spectacle. It helps that its large, behavior-ending boss fights have also been repurposed for instance strike missions. Before End of Dragons, it was hard for me to say what campaign boss battles I really enjoyed. There’s a lot here, though – probably because their reuse in more complex endgame forms gives ArenaNet reason to spend more time on their construction.

I’ve seen people complain that the last third of the story is rushed, but it fits the structure of Guild Wars 2. For example, if the gang of Echovald is hastily explained by the campaign alone, it’s because their story is more fully represented on the map itself – through dynamic events and collections. As a region, Cantha was part of the first Guild Wars, and that history is woven into the map and the characters that inhabit it. I especially liked the many ambient dialogues of the NPCs who introduced the weirdness of the whole of Tyria – the tree and all the people.

The maps have always looked beautiful as well. The first is Seitung Province, bright and vibrant – a spectacular presentation that deftly sets the stage and highlights how the region has changed after a day of fierce battles. Instead, Echovald Wilds is dark and ominous—a twisted forest with dense foes that convey the threat of a lawless frontier. That said, ambition sometimes isn’t on par with Guild Wars 2’s abilities. New Cannon City is a grand, towering metropolis that showcases the Jade technology employed in the area (and provides ArenaNet with an excuse to eschew common cyberpunk dystopian tropes). It looks impressive, but it’s not that much fun to explore. It’s just a little too lifeless for an otherwise bustling metropolis, and repeats a consistent problem that the game’s more vertical maps are annoying to navigate. It’s more of a small map issue, and the lack of clarity of routes between different levels of a city can be frustrating — especially in full-map metadata that has to navigate quickly between events.

Still, the new map is an overall success and offers a fair amount of challenge as well. A good mix of enemy types ensures its combat feels distinctly different from other regions – Guild Wars 2 has always done a good job of using density, status buffs, debuffs and crowd control effects to make open world encounters feel specific to their map , and the trend continues here. Map-wide meta events are some of my favorites to date.

More than ever, this expansion takes Guild Wars 2’s current touchstones — Heart Missions, Story Missions, Dynamic Events, and Strike Missions — and builds them to create a distinct learning curve for players. For the first time in the open world, there is an area where concepts like combo fields and resistance bars are explained and demonstrated. This knowledge is then reinforced through stories and tested in events – most notably on the game’s final map. Built around the boss fights it showcases, Dragon’s End is a mechanically complex boss in an open world. It’s spectacular – both visually and in terms of challenge and drama. If you can complete it, you’re ready to enter the strike mission – the current location of Guild Wars 2’s instantiated endgame. The progression seems natural, and hopefully makes more players feel comfortable tackling the game’s more rewarding endgame activities.

Following the template set in Guild Wars 2’s first expansion pack, Dragon’s End also introduces a new set of features that can be acquired and upgraded through the Masteries XP system. It’s an eclectic collection: fishing, dinghies, a little robot companion, a new mount, and a new hub area, which is home to the expansion pack strike missions, as well as vendors, services, and even rest XP award. Unlike Hearts of Thorns and Path of Fire, there isn’t one big idea here that could change the whole game. Gliding and mounts have become so important to Guild Wars 2 that End of Dragons also offers them for players who didn’t have previous expansions – as the map design suffers from not having these traversal methods.

With End of Dragons’ own Masteries, while there are some nice quality of life improvements, it hasn’t fundamentally changed my relationship with the game. Fishing is fun, but it’s mostly self-sufficient and allows you to make food that makes you better at fishing. While it does relate to crafting new legendary weapons, it’s disappointing that the system doesn’t have a more immediate payoff. Skiffs also don’t feel like they have a purpose beyond their existence when the Skimmer mount already exists. They’re great for fishing — especially with friends — but that means they’re also looking for a spot beyond most independent activities.

Jade Bot is the most useful. It lets you use ziplines and terminals on the End of Dragons map, and is boosted by an upgradeable Emerald Core to make you more survivable. It also wakes you up when you get knocked down. It allows you to place a personal waypoint. It can be equipped with modules that can help you earn extra crafting materials or currency. It can give you an updraft as you glide.

It’s an eclectic tool with an already eclectic set of features, and while that gives it broad utility, it also means it’s not as obviously desirable as one of Path of Fire’s mounts. Still, the fact that it augments your existing abilities means that – unlike fishing – the Jade Bot has a purpose beyond its own existence. I especially like the Glide Booster because it integrates nicely with the existing air mount and dismount skill set and allows you to build a lot of heights quickly. It’s great for setting up Griffon’s Aerial Finesse, which lets you speed up the map.

Still, the interaction of the Jade Bot system may not be that cumbersome. The fact that you have to use the Workshop terminal to change modules – although it exists on the Devices tab along with a system that can be changed at will – is just one of the many UI quirks that have become more common as Guild Wars 2 gets older Another. This is a problem with multiple areas of the game.Actually the best way Find Major events and storylines in the open world are still hidden through collections in the achievement pages, hidden in their nested categories, and alongside other more generic achievements. It’s a system that needs to be overhauled for a while, but it continues to grow — further exacerbating its own problems.

End of Dragons is a high-quality expansion pack at a time when Guild Wars 2 is going through a major transformation. After years of neglect, the game has a new focus: a move to DirectX 11, a revival of World vs World with a new alliance system, and extensive changes to the class and profession balance. This work is still in progress. Improvements to DirectX 11 and World vs World are still in beta – the former is still a bit buggy, the latter is occasionally present in limited trials. The fact that ArenaNet only recently committed to quarterly balance updates makes it difficult to judge the new elite majors – as the old ones are in the midst of some radical changes.

In that sense, despite its name, the end of the dragon isn’t really the end. Nor is it a fresh start. It may have ended the Elder Dragons saga, but in every other sense it’s a continuation of a game with a long, complex, and sometimes chaotic history, but one that seems committed to refreshing itself for the future. In an MMO that’s getting bigger and bigger—a structure where new areas only increase the number of things to do on a daily basis—Dragon’s End has managed to make a place for itself, with the closest A decade of value alongside maps, events and endgame challenges. The quality of the content it adds often surpasses what came before it, which leaves me still hopeful for Guild Wars 2’s best days.