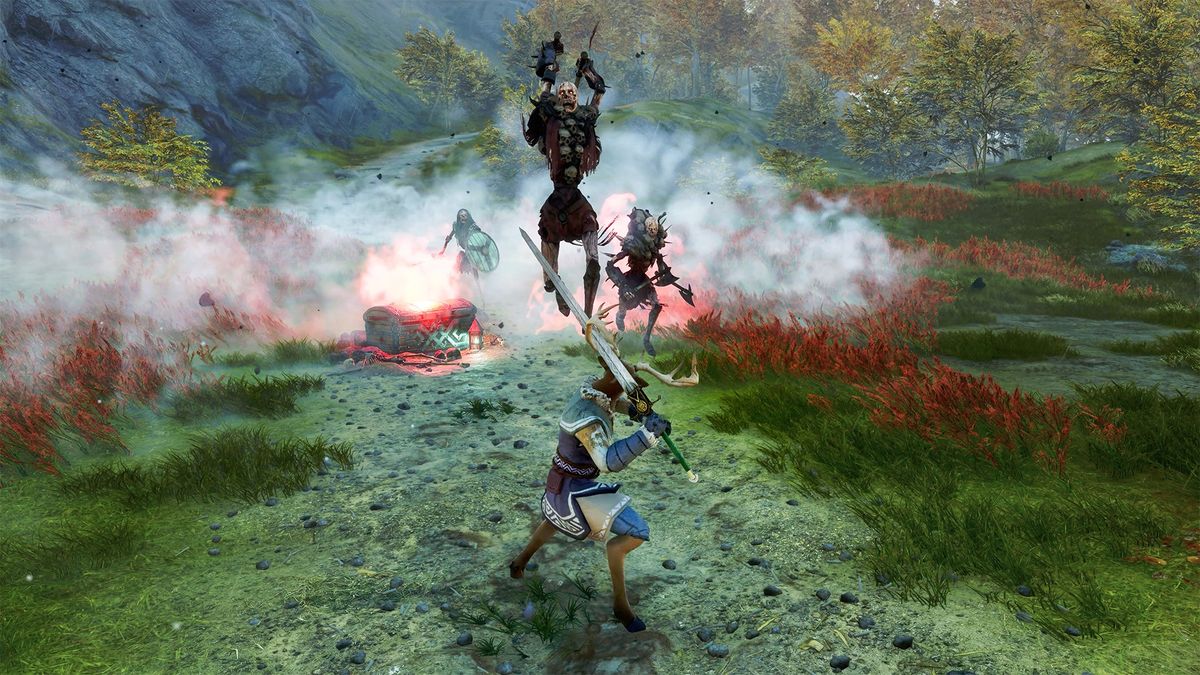 And this battle is very important. The core concept of Ravenbound is that it’s an open-world action roguelite, specifically third-person hand-to-hand combat with fantasy villains from Swedish folklore. In a typical roguelike/lite, linear progression and randomization would force me to survive in one battle room and then the next, creating tension by not telling me what’s going on next door. Ravenbound doesn’t work that way.

The first thing I do is jump out of a tower, transform into a bird, and check out the symbols that denote combat encounters and key spots scattered across the mountainous forest landscape beneath my feet. The world is on my wingtips, so I’m soaring in search of the location of one of the three keys I need to unlock the area boss, dive into the ground, become a human, and get ready to scrap.

it comes down to fighting

Combat in Ravenbound gave me a familiar array of moves: light attacks, heavy attacks, heavy stuns, blocking, dodging, and diving attacks by jumping before dropping heavy objects.My enthusiasm dries up when I start hitting the attack button because, unfortunately, dodging, parrying, and swinging the sword — the foundation of Ravenbound — all feel like bad In the alpha version I played.

When I jumped up and pressed the right trigger for a dive attack (controller recommended by Ravenbound), my character stayed in the air for half a second too long. When goblin-like Tufftir enemies perform similar moves, they do damage even if I’m away from them before they land. Dodge maneuvers let me change directions on the fly, and it felt thick rather than tactical. I can lock on to a target in combat, but using my analog stick to tilt left or right to swap targets works so little that I find myself unlocking and relocking a new target. That’s not ideal when those goblins often come in quick-moving packs of five or more.

The only bit of combat that almost clicks is the perfect defender, which knocks back and stuns enemies if I time it before they strike. Even I rarely use it to cancel my own attack animations – whether it’s a design or a bug, I can’t tell.

These complaints, which seem to be resolved individually, or even a systemic response as a whole will be able to pull the reins of its battle back on track. As it is now, the first time I encountered a group of double-axe-wielding humans actually made me cringe, and every subsequent encounter confirmed that gut reaction.

After a fight, all of Ravenbound’s supporting elements encourage efficiency – I still appreciate the tendency to rein in its openness. I can turn back into a crow at certain points on the map to fly to new encounters faster. Towns near the center sell additional health potions as well as NPC quests that will reward gold to buy those non-renewable potions. Combat encounters reward me with a card that I can add to my hand: some provide extra attack, others defense, and a particularly handy card that causes bleed to nearby enemies when I use a health potion. Sadly, by the time I received the potion, I had run out of potions and was reluctant to take on a quest, so in order to afford a more muddy fight.

The developers told me they wanted to appeal to people who aren’t usually roguelike/lite players — presumably third-person action fans who might be open to change. This is me. When a game has an interesting prospect, I want to see something successful, and I’m willing to make excuses for it. I’m certainly ready to forgive Ravenbound’s mid-development oddities, like lighting glitches and placeholder text, and even the cohesion between its map and roguelite tension that feels half-baked. However, the battle as the main activity is not negotiable.

I’m still intrigued by Ravenbound’s attempt. A roguelite with a known map, day and night cycle, weather, if I dared to take on the quest – these are all valuable ideas. I had hoped to get rid of the first hand by judging whether all of these things had legs or not. I wonder if its card-based upgrades are as compelling as unlocking guns with weird effects in Enter the Gungeon. But I can’t even make that decision when its core swordplay feels so bad.

The hopeful point here is that Ravenbound won’t be releasing right away, so things may improve. Systemic React is still planning a beta test sometime in the near future, you can sign up on its website. If you’re still interested in a roguelite that extends into the open world, try getting your hands dirty ahead of time to make sure.