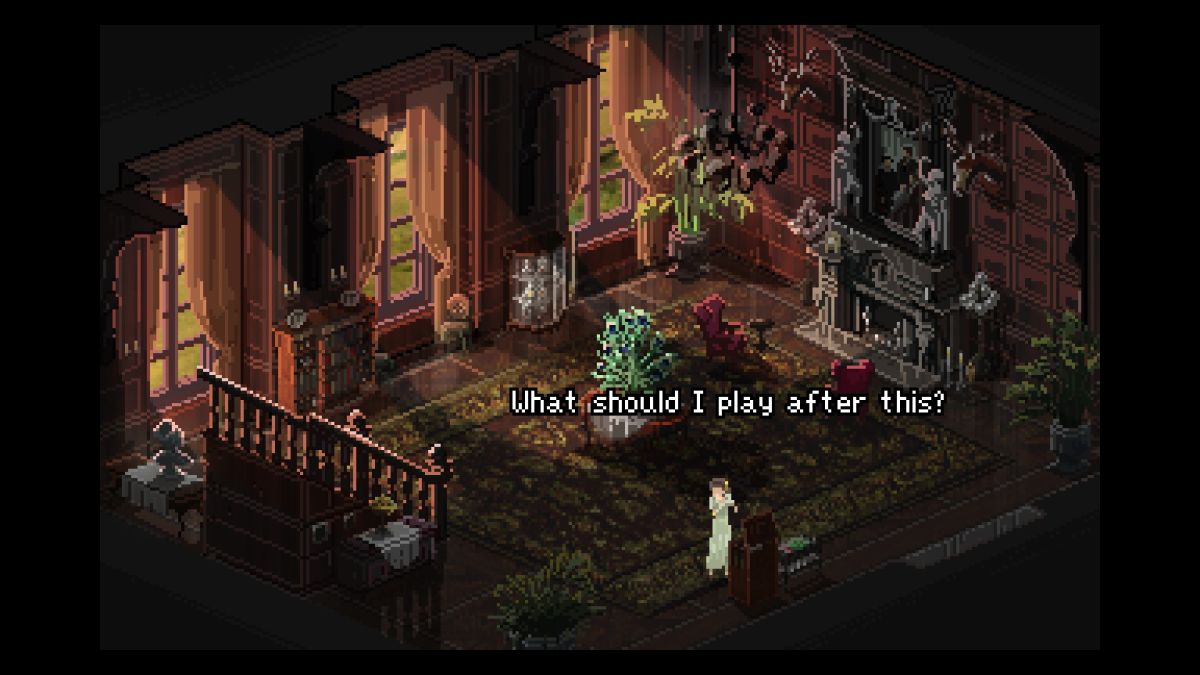 One of my favorite games of 2021 is completely free, takes 5 minutes to install, and even if I deliberately took the time to walk around and click everything, it took less than 2 hours. However, it’s one of the richest story-driven experiences I’ve had the pleasure of playing, wrapped in a point-and-click adventure with extraordinary depth.i’m talking about If on a winter night… four travelers By Laura Hunt and Thomas Möhring in dead idle game.

Like its literary namesake, Italian author Italo Calvino’s story, If On a Winter’s Night…is a narrative experiment that delves into the art of storytelling. There are four chapters: The Silent Room, Mrs Winterburn’s Slow Disappearance, The Nameless Ritual, and finally, If On a Winter Night. It’s a snowy night somewhere in Central Asia in 1929, and we set the scene on a gorgeous steam train—unlike the famous Orient Express—that seems to be throwing a masked party. Several newcomers are lost and unsure how they got there, and the game begins with everyone trying to recall what they did in front of the train.

It deftly blends existential horror and mystery, using its compact, pixelated form like a weapon to weave these short, disparate stories into a cohesive whole.

From the small changes to a painting in a hotel room in The Silent Room, to the minutiae of the drowning library in The Nameless Ritual, the game never skimps on details. For lovers of historical drama and psychological horror, it’s a feast for the senses, while brutally digging into painful themes: suicide, depression, and homophobia. As I replayed the first chapter about an affair between two men, it was devastating to explore every dialogue option even though I knew all paths lead to the same ending.

The soundtrack deserves a special mention. Carefully selected classical music (Sati, Verdi, Dvorak), Irving Berlin tunes and Hunter’s beautiful sound design all bring each chapter to life with vivid historical detail, especially Winterborn The disappearance of Mrs. This is a particularly auditory-led chapter that explores memory and grief, where the presence of the gramophone is hugely meaningful in a faded, silent old mansion.

Combined with Möhring’s meticulous animation, Mrs Winterbourne’s sprite is no longer a simple combination of pixels on the screen, but a living embodiment of nostalgia.

Talking about the power of short games shouldn’t be groundbreaking, but in an industry where success is largely defined by ongoing service MMOs and blockbusters that can take 100 hours to complete, length and “better value” games are often considered symbols of.Short games like If On A Winter’s Night prove that you don’t need to spend dozens of hours creating a gorgeous atmosphere and telling a killer story, and Vintage Adventure Game Studio Engine Still an invaluable free tool.It’s been used to make some of my favorite adventure games over the past decade, including Wadjet Eye’s Tech Babylon.

Hunt and Möhring have created something truly special here, and the fact that the game is free is so frustrating to me because I really want to pay for it like a Futurama meme (at least one small $3.99 DLC backer bundle). If On A Winter’s Night… elevates the art of storytelling to a genre already rife with great stories.

While revisiting the game to write this, I realized that if winter nights… are very important to my experience in 2021, maybe because this touching article Written by Edwin Evans-Thirlwell on Playing Games as an Act of Caring. “I try to frame each scene the way it’s supposed to be framed, and explore at a speed that allows the details of the environment to flourish,” he wrote, playing an unfinished game in front of its creator. “I try to act the way my character would behave and give due respect to occasional dialogue rather than rushing through event triggers.”

Playing alone, I put myself into the rhythm of each scene—the painful shreds of the vulnerable Mrs Winterbourne, the controlled, submissive steps of Carlo as he gets closer and closer to an inevitable outcome. Hunt and Möhring were obviously not here to see me (thank goodness), but one of the most striking things about If On A Winter’s Night is how it has full mental and emotional support.

While I don’t play this game to serve others or to dress up playing this game as an act of self-care, it’s easy to get caught up in its microscopic chapters and feel like a part of something that’s warm and intimate, expansive and universal. This is a game you play only for yourself. If I’m naming something Game of the Year — a random title that usually says more about the nominee than the game itself — if Winter Nights might be that.