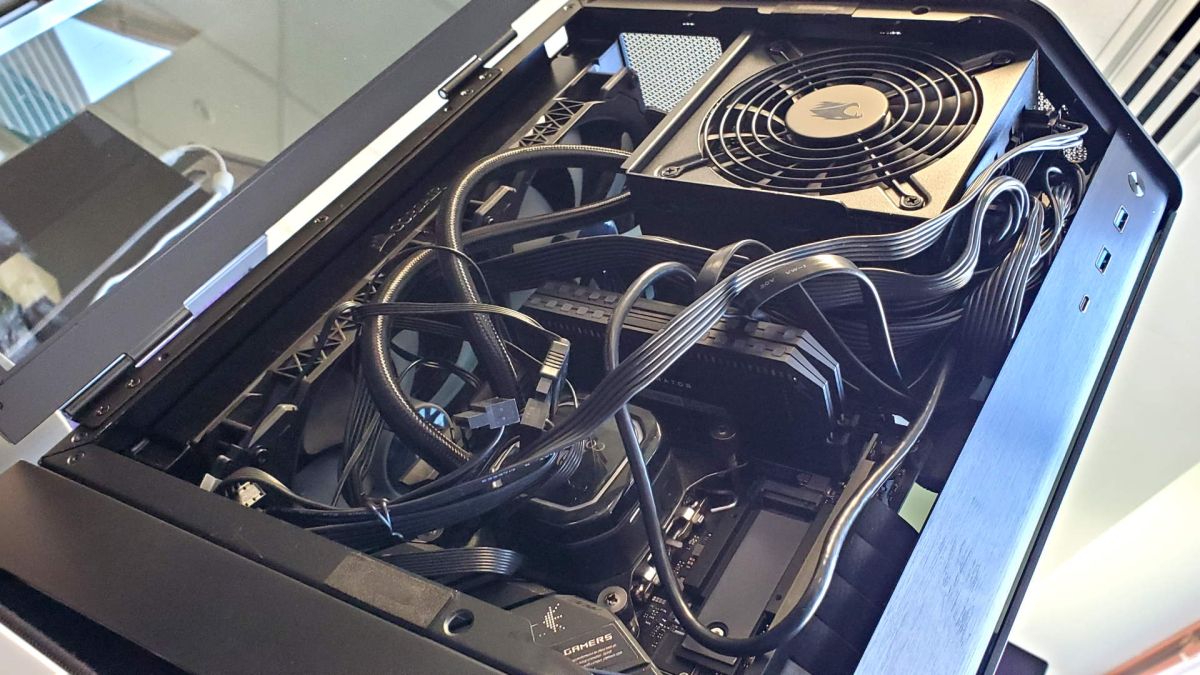 I’ve been playing around with a lot of new (or new to me) small cases lately, and if there’s anything really useful when building an ickle PC case, it’s good cable management. Thankfully, the best mini-ITX PC cases have cable routing as part of the design, sadly some don’t.

This really doesn’t help me. Because I’m really, really bad at cable management.

I’ll half-heartedly defend myself by saying that I’ve spent too much time building, tweaking, and rebuilding different machines and nothing has ever really been “finished”. I’m always pulling parts out and cramming new parts into my myriad of different systems, so it seems a bit pointless to bundle the wrong wires and have to loosen them again.

But mostly because I’m lazy and slamming the door on a mess of cables, keeping away from prying eyes is my preferred method of construction.

That’s why I really like compartmentalized PC cases. You can put super shiny components (like graphics cards, motherboards, etc.) under a tempered glass panel on one side, while hiding the PSU and its Cthulu-like tentacles in an isolated section of the case.

However, without good cable routing, I’ve created a monster in this G.Skill Z5i. It’s horrible, and no amount of color on the swinging side panels can really cover up my shame.

But, you know what? I’m not ashamed because I really don’t care and neither should you.

I do know some people are very picky when it comes to cable management – a quick glance at the ubiquitous PC build images on reddit shows that to be true. Those people will tell you that it helps with good airflow, but honestly, not to the extent that you or your expensive hardware really notice.

In reality, this is purely an aesthetic choice, and there are better ways to kill your time than tying up a few wires. Especially if after a few months you have to cut those ties anyway to install something else.

But what do you think? Are you discreet and proud of tying up these fools, do you let your PC’s wires roam free in your case? Or do you just leave it all up to the system manufacturer and never get close to the inside of your PC so as not to spoil the zen state it shipped from?

Share your pride or shame with me. Make this a healing place.

Lauren Morton, Associate Editor: Actually, my cable management looks a bit – oh you mean the other side my motherboard. I’ve also adopted the “shove it under the bed” approach to the back of my case, although I now proudly subscribe to clean cables for my tower fronts and desks.

I built this myself, so I’m guessing it would be a rat’s nest that was sealed up that day and never touched again. To my surprise, it looks like I did try using my NZXT H710’s pre-installed cable routing channels and straps. It’s far from meticulous, but it’s better than I expected from myself.

Katie Wickens, Hardware Writer: I give myself good advice, but I rarely follow it. Cable management is one of my most hated issues, and the satisfaction of getting it right is unfathomable. Even though I got a cable organizer for him at Christmas, I sometimes sit here annoyed at my partner’s poor cable management. He even stores stuff on his computer, which…I mean, it’s kind of weird, right? such as banknotes.

Still, here I am, the desk is littered with wires and the fan cable in my machine is twisting like crazy. At least I have self-knowledge. I only had to be five minutes away from Cities: Skylines to really fix them. I won’t hold my breath.

Jorge Jimenez, Hardware Writer: At least twice a year, I spend an entire afternoon focusing strictly on cable management. I ordered a bunch of cable sleeves and zippers and organized my cables into small bundles for efficiency.

Back in the fall, we moved into a new house, then I took paternity leave, and now my cable management philosophy is: “Don’t look at it, it won’t hurt you, Jorge.”

I have two different desks and PCs for work and play, and the cable situation on both is a pure sad and chaotic mess. I’m sure I’ll spend five hours working on this tangled horror show someday. But honestly, who looks under the table?

Alan Dexter, Senior Hardware Editor: People are overexcited about cable management. They want to browse through the side window of the PC to check the order. not me. As long as nothing in my machine gets too hot, I don’t have to worry about it. The fact that my machine is under the table might be part of it, and of course I might be a little picky if it’s on the table. But that’s not the case, so I don’t think about it. In fact, there are fan cables hanging all over the place, and while they do bounce off the fan blades every now and then, it usually works fine, whirring to itself quietly.

Honestly, I’m impressed with the wiring on the back. I somehow did it. But that’s probably because the back cover doesn’t get clipped if left to their own device.

Brand Director Tim Clark: Tim is too busy to write this post. In fact, he was too busy to sort out any sort of cable either, so he just outsourced it to this guy. However, he does want us to notice that working too hard on that desperate single cable tie below.

Imogen Mellor, Featured Producer: I’m the presenter. My cable situation was pretty neat when I only had one monitor and one PC. But over time, I’ve just collected a whole bunch of junk. Microphones, audio interfaces, Switch, PS5, capture cards, Stream Deck, cameras—you get the idea. a lot of.

So while the top of my desk is a bit messy, the bottom of the secret lab desk is a monster. It has a neat little room to hide my shame. I’ve tried sorting it out before, I promise. With so many uses and so many cables, I’ve never found a good system.

Wes Fenlon, Senior Editor: The bottom of my desk probably represents the best cable management I’ve ever done in my life. Since it’s a standing desk and it’s in my living room, I don’t want my usual nightmare haunts to be on full display every time I lift it up. So I took the time to actually twist the cable ties and then run most of the cables into neat bundles. That’s therapeutic, although making sure all cables have the proper amount of slack for standing desk use has proven to be quite a pain.

My case cable manager also looks clean (although the tubes that go to my arctic liquid freezer are really big). Just, uh, never mind the dust.