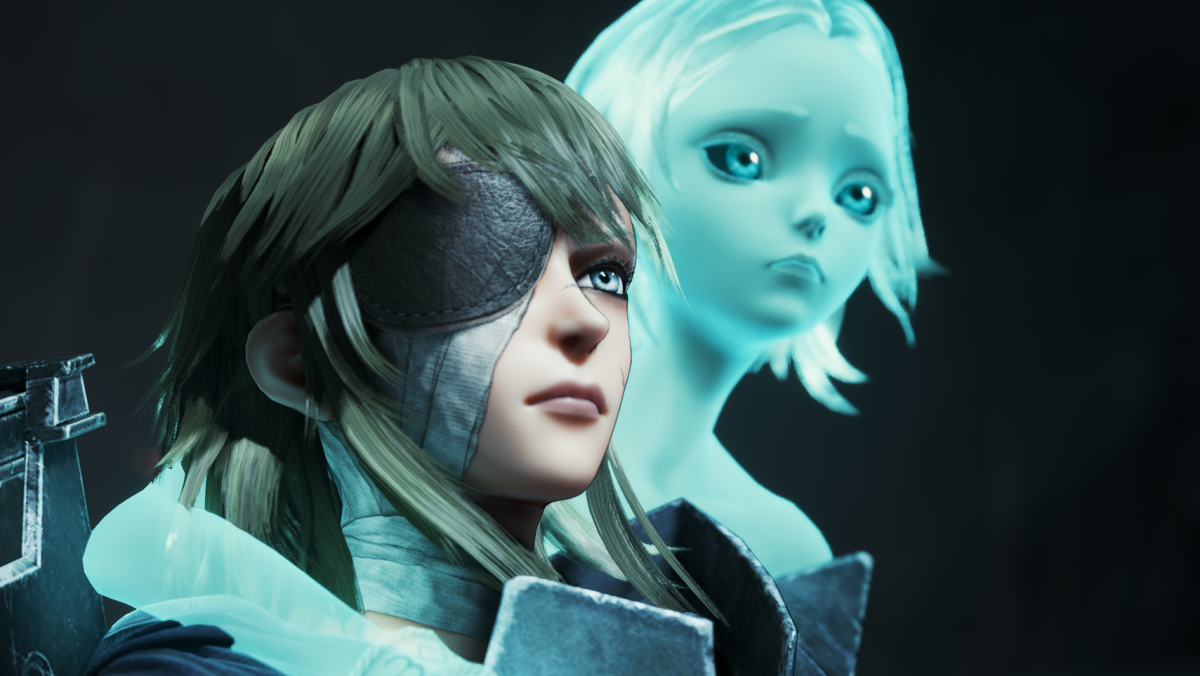 The original Devil May Cry was one of the strange developments in the game. It started out as a Resident Evil title but morphed into a pseudo-fighting game with combos and flashy airstrikes – but it kept the horror setting and fixed camera angles. Recent entries take place in fully three-dimensional worlds and toned down the horror elements – but what if they didn’t? Scrappy DMC-like Soulstice is here to answer that question.

While Devil May Cry has become more OTT and comedy over the years, Soulstice is dark, dreary, and steeped in grim medieval vibes. Aesthetically (though certainly not world design), it resembles the less cheerful Dark Souls, without even the fleeting glimpse of the Onion Knight, or the blazing sun that provides moments of warmth and beauty. What remains is a ruined settlement – the towering city of Ilden – full of transformed citizens and monsters from the Void. Playing as Briar the Ash Knight and her ghostly sister Lute, you must enter the city and close the breach to save the world.

Soulstice’s story lives in an awkward place, littered with melodramatic moments on a thin, simple plot that never extends beyond the city or a handful of actors. We’re asked to care about the sisters, but they both come from boring archetypes—driven, deadpan warriors and innocent little sisters—and show no personality beyond that. The game is filled with a small amount of communication that should theoretically tell us something about them, but they’re mediocre rhetoric – “I hope the killings end” – and, worse, they’ll be as inept as you are. Repeat the progress without interruption.

Chapters end with cutscenes used to move characters to new locations, but barely flesh them out in the process—and the same goes for the world and its history. There are reservations, and conspicuous lack thereof, in elaboration and character development. You finally have to give us a reason to care.

Instead, in this apocalyptic, eerie fantasy setting, story gives way to action and atmosphere. The domineering soundscape only relaxes during fast-paced battles, and it’s a thick ambience, while the less saturated palette makes it difficult to read the world at a glance. I had to squint at my screen multiple times to determine the layout of the scene, seeing the edge of the platform before I fell off the end of it. Raising the brightness would help, but the color scheme still didn’t change enough — mostly shades of black, blue, and green — to make the environment immediately visible.

As in Devil May Cry, Soulstice’s phases bounce between two phases. There are exploration phases, where Briar traverses linear environments (with occasional power-ups or currency hiding in dead ends), and clunky breakout fights as creatures leap out of portals to challenge you. Magical barriers create enclosed battle arenas , as you knocked back each enemy, your performance was graded: how long it took you, the combos you completed, how much damage you took, etc.

While the animations are a bit stiff and the enemies aren’t as extravagant as DMC or Bayonetta, fighting in Soulstice Yes Delightful, bonus feedback for weapon bashes and monsters explode in flash bombs of meat and currency. There’s less emphasis on ranged combat (it takes a long time before you get your bow), and a lot of emphasis on your ghostly companions, interrupting enemy attacks at the touch of a button.

When you slam and dodge like Briar, juggle mobs, and try to remember combos, there’s usually a button prompt above your enemies. When the timing is right, the lute intervenes, knocking back arrows or weapons or freezing enemies in place, depending on the context. It’s a tiny Arkham Asylum that lets you take on multiple enemies at once without worrying about being attacked from all sides.

The timing was good, but the fight was still challenging, as the lute couldn’t resist everything at once. Combat has grown in size and complexity, introducing monsters that are invulnerable until you activate the proper energy field, knights in armor who must be knocked back first, and ghosts that possess creatures and threaten to resurrect them. As a result, it can be difficult to keep up with all the Lute’s button prompts and remember that frozen enemies will eventually thaw.button mash yes only About feasible, with the help of consumable (and limited) health items you can buy or find in the world, but you can never fully turn off in combat.

Just when you get the hang of the energy field—turn on red to hurt reddish monsters, and blue to fight ghosts—suddenly you have to contend with mines too.These explode when you turn on red, and explode if you leave it out for too long. Sometimes, combat in Soulstice demands too much.

Still, it’s nice to survive an exhausting battle and see a platinum badge at the end – ok, a gold medal; well, a silver coin; yes, a coin bronze. This bad result is becoming more common for me as systems pile up in Soulstice, migrating from the super powerful Unity to the temporarily devastating Rapture State. These advanced abilities actually become essential late in the game, but they are poorly taught. Tutorial popups lack detail, and the skill tree is full of confusing upgrades.

For a long time, I didn’t know how to implement movement in Unity. Turns out they were actually Terminators. Before performing some special action, you first have to build the Unity meter (by mixing Briar and Lute’s attacks, without getting hit) – then the Terminator will continue. But it’s not clear at all, I only figured it out by poring over the help menu and Pipa’s (four) skill tree. As the options are puzzling, I appreciate Briar’s veritable bush, which is just a list of weapon combinations and improvements. Sometimes less is more, you know? Bosh – I just unlocked the new move for the whip.

Outside of combat, it’s a much simpler game. You follow winding paths through dark, colorless cities, sometimes hiding in alleys to smash crystals for currency, or occasionally pick up nuggets of upgrades. The Lute’s multipurpose energy field also allows Briar to bypass traps, destroy crystal gates, and jump on ghost platforms – all of which aren’t quite as good as you’d hope. It’s mostly a camera glitch, and it’s a throwback to the early days of Devil May Cry. When not at war, having fixed camera angles does build cities in gorgeous ways, but it’s hard to, ah, actually play games.

Take the platform as an example. There are a lot of platforms in Soulstice, and there’s never been a consistent camera angle. Most of the time scenes are designed for style rather than practicality, so it can be difficult to judge the distance between adjacent platforms. When 3D games stick to the platforming part, I usually use the character’s shadow as a guide, but Soulstice’s world is so murky it’s not really an option. This erratic depth perception is a perennial problem, not only on platforms, but sometimes in combat, or when you’re smashing crystals in mid-air. Am I with them or not? It’s hard to say. Miss, you have to crawl back and do it again.

Thankfully, combat (usually) gives you full camera control, zooms in and lets you spin the damn thing at your leisure. These moments of freedom are a consolation – but unfortunately, you win and then clumsily return to the original, floating point of view.

I find this transition always disorienting and always frustrating, as if I’m forced to admire all the work in the environment. Sure, it’s beautiful at times as the sunlight filters through the smoldering skyline, but I’d rather have a consistent view that allows me to progress without having to constantly find my way.

The world is fake almost everywhere you go, and the space to explore doesn’t match what you see right before your eyes.You hit the invisible wall forever – oh, you can’t fall That alley, or hop on That roof, or That Platform, only certain (glowing) crates can be destroyed. Hiding invisible walls is an art, but they’re so clearly visible in Soulstice that it robs the game of any immersion.

Most importantly, Soulstice feels like a forgotten action game for the Xbox 360: a relic of the peaceful era of AA gaming.Games like Dark Sector and Dead to Rights: Retribution bring some fresh ideas and decisively All right At the time, but probably less than a decade from now. Soulstice also has some great ideas — the lute largely destroys the divine formula of DMC-style gaming — but the edges are just as rough, with a yo-yo camera that keeps breaking the game. For me, the monotonous setup and level design eventually drained my enthusiasm, but if you can ignore its problems, it’s a solid Devil May Cry with thick and challenging combat, and not enough of those can be bypassed.