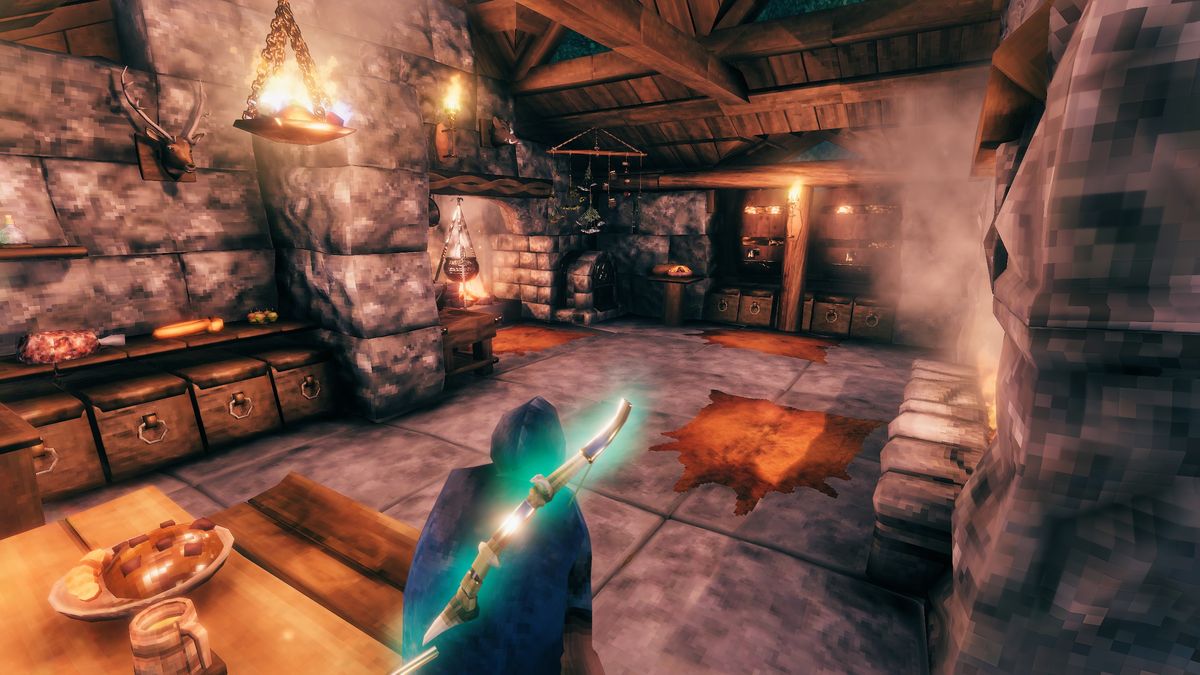 To be honest-I have never set foot in the Nether. Minecraft is a game I will play for several nights at a time to build bases or explore biomes. If I am in a loose state or I have had a particularly stressful day, this is always something I will inspire. I can not play for a few months, but this is a game I always come back to. Or until February, Iron Gate Studio’s Valheim launches Steam Early Access. Strangely, the afterlife of the Vikings is now my stress-free virtual retreat.

One of the best things about Valheim-it doesn’t show up immediately if you haven’t played it-is how forgiving it is. There are cruel biomes that are deadly enemies for unprepared people, but if you don’t want that kind of challenge, you can easily avoid these areas. It’s worth killing the first boss to get a pickaxe and copper and tin as resources, but you can spend all your time building your base and unlocking recipes without going any further.

You will not go hungry in Wallheim. If you don’t eat, the worst-case scenario is that your health and endurance are at the lowest level, but neither will be below a certain point-unless of course you are harmed. You don’t want to lack this kind of mechanics in such survival games. It is even more forgiving than Minecraft’s view of hunger, which is quite cold compared to most survival games.

Before discovering Wallheim, I occasionally built extensive bases in Minecraft, but I spent most of my time in creative mode. I will start a new world and fly around looking for the village. When I find a place I like, I will start repairing it-filling in the gaps in the wall, clearing the grass from the path, and organizing the place into a puzzle The villagers watched.

Valheim’s console commands can be used in a similar way. You can activate the god mode so that you won’t be hurt and won’t produce anything from resources to enemies. You can also activate its creative mode version, allowing you to make things without a workbench or resources.

If you are new to Valheim, I suggest that you do not use console commands for now. Although they are good, many of Valheim’s magic comes from exploration and discovery, and when you turn to cheating or shortcuts, you lose some excitement.

Generally speaking, I like to start a new world with a character with a lot of food and some basic weapons, and then I will explore everywhere. I am mainly looking for villages. If I don’t like the direct layout of the world or its topography, I will leave, delete it, and start again.

I’m pretty sure this habit started in Minecraft, because I’m always looking for a perfect base, also in Wallheim. I’m not sure I can tell you exactly what I’m looking for, but I know when I will find it. Most of the time I can’t find the perfect position, but it doesn’t matter. Exploring is half the fun-although it’s not that fun when you accidentally walk too close to the border of a Surprise Plain biome and get shot by Deathsquito in your basic leather armor.

Villages in Valheim are not as densely populated as in Minecraft—unless you count the rough (and violent) draugr—so you won’t be satisfied with seeing villagers using newly renovated buildings. But the village itself is often an excellent location for base construction. This area is usually already flat, so you can dismantle the basic structure and build your own. However, the more advanced houses in the village of Drougr are usually enough to keep, and restoring these houses to their former glory by simply using the repair function of a hammer will bring a lot of satisfaction.

I have a permanent world and a rather exquisite home. This is the second world I settled down—I gave up my original world because I was fed up with the trolls invading my base and destroying my things, just like my six wolves. If one of them manages to enter and Lucky swing for logs. This brings me to the second cool thing about Valheim’s progress (or avoiding it).

When you start to kill the boss, your base will be attacked by increasingly challenging enemies. Since no leader was killed, these raids started with wild boars and necks and occasionally attacked you. These are easy to handle.

After killing the first Boss Eikthyr, gray dwarves from the Black Forest biome will start to invade your base, and then after you kill the second Boss, then the draugr, skeleton, or troll, and so on. Although not too difficult, these raids can become very annoying when I just want to focus on construction. Fortunately, Walheim has a simple solution: kill the boss in another world. You can still get trophies and loot, you can bring these items back to your permanent world and use them there. Essentially, you don’t need to make a surprise attack to get the benefits of boss progress. perfect.

It’s not that I will never return to Minecraft-that blocky sandbox has a lot to love-but Valheim somehow feels like an adult version. Not only does it look great, it’s easier to build, and you don’t need to mess with annoying blocks.Of course, there are some incredible Minecraft server over there. But I want to make something that looks obscure without needing an architecture degree. Or wander around looking for the best place to build the ultimate base. In terms of these two points, Wallheim is my favorite new survival game.