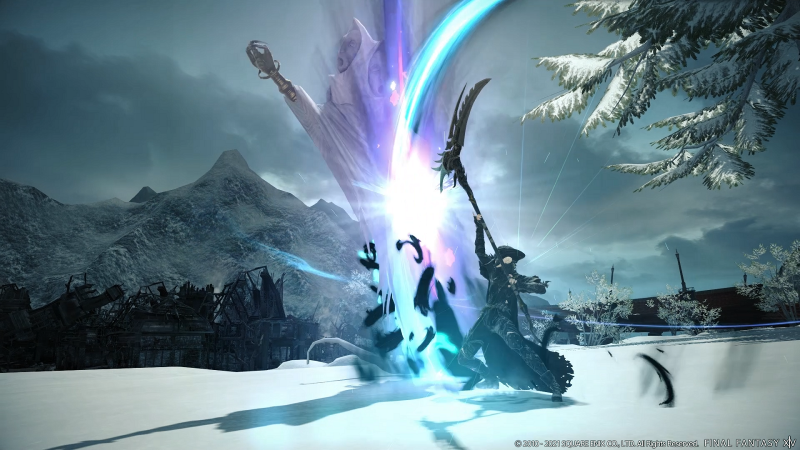 In the demo session, I had the opportunity to try out a small part of the Endwalker expansion of Final Fantasy XIV, which was launched on November 23. Obviously, MMORPG and various other types of presentation sessions are complex beasts, but I do have enough time to experience the new work firsthand and explore the tower of Zot in the dungeon. As anyone who has played Shadowbringers might have expected, Endwalker is becoming as good as its predecessors in the expansion field.

Most of my time is spent playing the new melee DPS professional Grim Reaper. This course faded the aesthetics of blood source, so it was almost a deal for me. However, Reaper not only looks cool—according to the demo session, it should be a fairly challenging and dynamic damage level for those who want to stay alert in all stages and styles of combat. With a large number of different contextual capabilities and several different resource meters, Reaper provides a savvy injury dealer with a large number of possibilities to deal with any situation. Although most players are familiar with the concept of filling up the resource pool to unleash powerful skills, Reaper must take care of several at the same time.

Admittedly, it is entirely possible to play Grim Reaper and enjoy it without mastering the timing of multiple skills, but hey, if you want to maximize your potential, you need some training. In other words, after playing for a few hours, I am much more comfortable than staring at the stacked skill bar when picking up the character, so I do think this is feasible for most players (and it’s fun! ). It feels great to become a real god of death after charging up and releasing a lot of damage. Like all melee combatants, you need a way to get out of action as quickly as possible. Fortunately, Grim Reaper has a cool little portal that you can set up to allow you to enter or exit the weight of the matter that is decided upon. In summary, I played Grim Reaper in Endwalker, and I didn’t get close.

I didn’t spend too much time on Sage because, well, I never play therapist, but what I want to say is-the visual identity of the two new professions here is superb. After having the electric medicine sage, who would want to become the White Master? This is a good question. Sage’s gear exudes a cool breath, and to be honest, I almost thought about playing the role of a therapist. Well, not really.

Although I have to roam several levels, there are no real missions available in the area, and my fate (public missions) is fairly standard-I will not spoil the surprises there. However, we did have a great time at Zot Tower, one of Endwalker’s new dungeons. I played the dungeon with other players, and trust (an NPC that can be used to make the group dungeon content that debuted in Shadowbringer). As soon as you enter, you will be hit by the legendary track in Final Fantasy IV. As someone who put “Final Fantasy IV” at the top of the FF pyramid, this is really what I need.

The number of “junk” (ordinary enemies) in the dungeon seems to be just right, and for the entry-level expansion content, the boss battle is also very solid. Yes, we have to avoid many things on the ground. Yes, we have some contextual movement situations. Yes, Magus Sisters are the bosses in the tower, culminating in an epic battle, you will fight three people at the same time, and then they will launch a Delta attack. Before you knock down the first sister, that particular encounter may be quite stressful, because the delta attack needs to evade many attacks in a row. This is not a trial or a raid or anything else, but it did stimulate my interest in transcending things.

Obviously, playing MMORPG for a few hours is just a drop in the bucket. But everything I saw in Endwalker speaks to a greater game and its continued development path, and they have improved the quality of the title in each extension. With Endwalker representing the finale of the current storyline, I look forward to a lot. Everything I have seen so far thinks we will get it. See you in November!