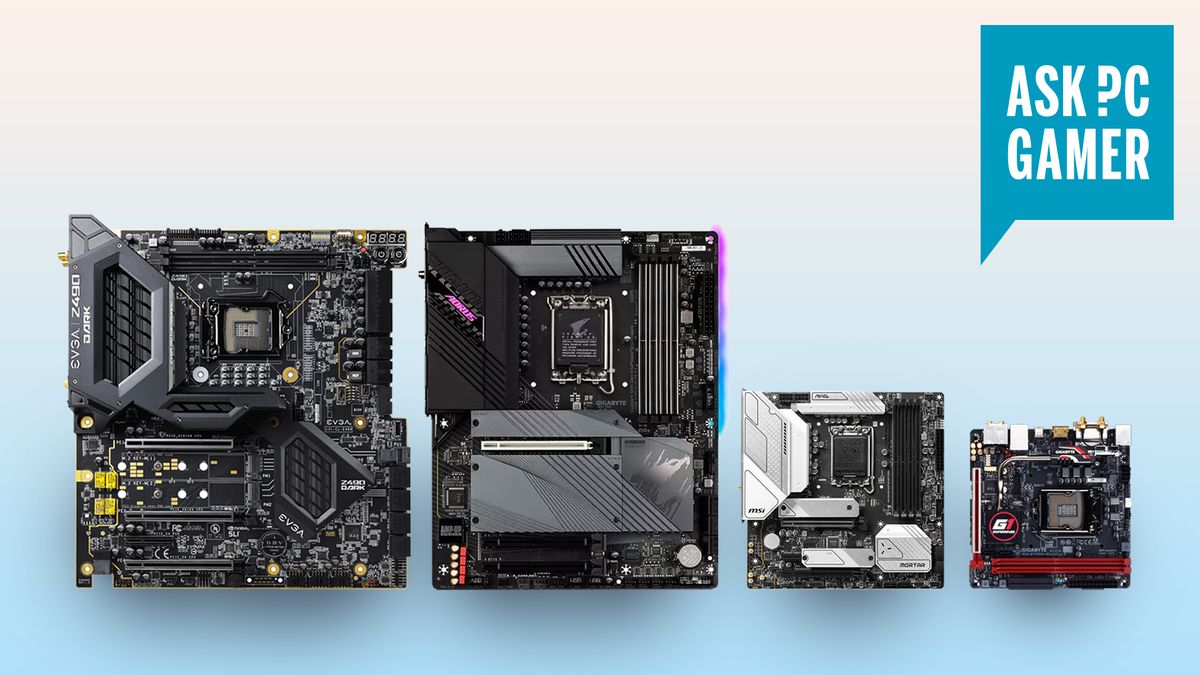 Motherboards and motherboard slots are a theme that will bore even the most enthusiastic PC gamer. Still, you have to do this right from the start of a new build.

The array of motherboard choices out there can be bewildering. There is one for every use, niche and sensibility, and now they come in custom colors and patterns. The most important difference, however, is functionality, not aesthetics. Seemingly insignificant differences in model numbers hide huge differences in performance potential and hardware compatibility.

So before you get into all of this, there are a few things to narrow down. You have to know the type of socket you need and know the form factor you will be building. And decide if your rig is all about gaming, tweaking overclocked hardware, or productivity.

The motherboard itself won’t have much impact on performance, but high-quality components allow your CPU to reach its full potential. The shiny new Ryzen 9 5900X can’t be overclocked without a motherboard that allows it, and the Intel Core i9 12900K Alder Lake chip simply won’t fit on a pre-Z690 motherboard with an LGA 1700 socket.

Once you’re done here, check out our best gaming motherboards feature to find the one that’s right for you.

Consider your build style and size

The key to navigating the motherboard maze is mapping where you want to use the system. It starts with size. How small does your computer need to be? As far as motherboards go, usually bigger is better, roughly up to full-size ATX. Use the largest board your case can comfortably hold; don’t let the novelty of a small board tempt you unless absolutely necessary, or if novelty is part of the mission plan.

Why? Smaller boards cost more, provide fewer features, and are not as stable as larger boards. Unless there is a specific reason to use the Mini-ITX, it’s best to avoid using them for gaming.

For example, Mini-ITX motherboards with M.2 sockets often have them on the back of the motherboard, so you’ll need to disassemble the system to access them, or buy a case with holes cut out for this purpose.

As the price of E-ATX and ATX-XL motherboards and the chassis they require skyrockets, the “bigger is better” rule is eroding the biggest motherboards. Shell prices can more than double from mid- to full-size towers, significantly increasing the system’s bottom line. When buying and building products other than ATX, remember to include hidden fees.

The next step is to list everything the system needs. What kind of drive are you connecting? Are you using an ethernet or wireless network? Are you running multiple graphics cards? How big is the CPU cooler? Any motherboard worth considering should fit all this and have room to grow. It’s easy to be lured by a premium-priced boutique board, only to find that the RAM slot is too close to your cooler’s CPU slot, or that it has fewer USB Type-C ports than you need. When it comes to motherboards, features and stability trump performance requirements.

Early in the build process, take a moment to consider how your upcoming PC will look and feature. Do you want a gorgeous, LED-soaked screamer or a stylish and quiet sleeper? Want to build a full-scale plexiglass tower that shows it all, or an incredible little silver tabletop ingot? Once you have the blueprint, you can start selecting hardware.

Mini ITX: The smallest, designed for very compact builds and enclosures. There is usually only one PCIe slot, which means you can only install one graphics card.

Micro ATX: Smaller than standard motherboards, but with more features and expansion options than Mini-ITX motherboards.

ATX: Standard motherboard size for most PC cases, with multiple PCIe slots, M.2 slots for SSDs, plenty of SATA connectors and other features. This is the typical choice for any mid-tower or full-tower case.

E-ATX: Expansion boards are most commonly used in high-end CPUs, such as Intel’s Extreme series. They are more expensive and usually come with high-end features. Usually requires a large full tower case to install.

Our guide to the best PC cases has options big and small, and tells you what size motherboard you can fit.

If you’re still deciding on a processor, keep reading our guide to the best CPUs for gaming as we break down the choices based on each budget and interest. While your choices here will affect the types of motherboards you can use, don’t worry that your choices will lock you out of the latest features as they have in years past. While fans of AMD or Intel might argue that the processor comes first, the same is true for motherboards these days.

By now, you should also choose the graphics card that best suits your needs. For gaming rigs, this is the most important performance component, and the rest of the system should be built around running this GPU at the native resolution of the gaming monitor.

The chipset provides the control logic needed to make system components work together, from the CPU to storage, and is responsible for the type and number of connectors available inside and outside the PC.

Motherboards are identified by the chipset they’re based on, and these names change when major new CPU versions are released, which often happens. This means that at any given time, several generations of motherboards share the market, adding to the confusion. To help understand this, here are the current chipsets and the sockets they support.

Keep in mind that these are standard specs for many, although you’ll want to double-check each manufacturer’s designs as they do vary.

Made to accommodate 12th and 13th generation Intel chips (Alder Lake and Raptor Lake, respectively), Intel’s latest chipset installments come in the form of Z690, H670, B660 and H610 motherboards. All of these allow for some form of memory overclocking capability and are DDR5 compatible, although the H610 only comes with 1 memory channel – it and the B660 also only have 4 DMI 4.0 channels, half the 8 channels of the previous two.

All chipsets in the series support PCIe 5.0, with twice the bandwidth of the previous generation, although the latter has only one x16 PCIe slot, while the former also has two x8 slots.

If you’re going for an enthusiast gaming build, the Z690 is the CPU overclocker’s first choice.

On the other hand, Intel’s 10th Gen Ice Lake and 11th Gen Tiger Lake CPUs require the LGA 1200 socket. These include the Z590, H570, B560 and H510 chipsets, with the Z590 designed for CPU overclocking – are you seeing this mode emerging? The H510 also does not allow memory overclocking. Remember, this series is a PCIe 4.0 beast, so they’re not touting the current 5.0 standard.

Home to Intel’s 8th Gen Coffee Lake and 9th Gen Coffee Lake Refresh processors, the 300-series is now in development. The Z370 and Z390 chipsets that support overclocking and Nvidia SLI are most popular with enthusiasts, and the mainstream H370 and B360 chipsets complete the gamer’s corner of these early boards. Intel also introduced its enthusiast X299 chipset, which is aimed at its more extreme CPUs.

The X299 chipset uses the larger LGA 2066 socket to accommodate the extra cores and other features in the Extreme CPU. It was considered expensive at the time, but included plenty of channels for M.2 SSDs, multiple GPUs, faster DDR4 support, more ports, and more.

AMD is a bit better than Intel in socket compatibility and motherboard longevity. Processor compatibility spans multiple generations, so older Ryzen CPUs should work fine on future motherboards, although you’ll need to check the manual and update the BIOS to run newer processors on older chipsets.

Ryzen’s AM4 and Threadripper’s TR4 sockets have been around for a long time, and 2019’s 3rd Gen Ryzen CPUs can even run on 1st Gen AM4 motherboards with a BIOS update.

However, AMD will introduce its AM5 socket later this year.

Current enthusiast chipsets for AMD sockets include the X370 and X470 for Ryzen, and Threadripper’s X399, TRX40 and WRX80 for Threadripper Pro.

Threadripper also supports 64 PCIe lanes and the number of cores that support them, enabling virtually any combination of add-in cards and drives. However, as with the X299 platform, for gaming purposes, you’re almost always better off sticking with AM4. Not that Threadripper can’t play games, but it’s not faster than Ryzen, and the extra cores aren’t being used in any current games.

At the other end of the price spectrum, AMD offers its own Inexpensive AM4 chipset In the form of motherboards based on the B550, B450, B350, A320 and A300. They offer fewer ports than the flagship X570 and X470, but the B550, B450 and B350 support overclocking and run the same default memory speeds as the high-end X370 and X470, making them great for Ryzen users looking to save a few bucks Attractive choice but keep some tweaking options open. At the same time, A320/A300 motherboards are pure budget offerings, lacking many extra features, and in most cases costing no less than the B350. Unless you’re on a very tight budget, we generally avoid the A320/A300.

If you don’t need absolute top single core CPU performance for your enthusiast needs, and if you have an older graphics card (basically a Vega 64/GTX 1080 or lower), you’ll find it enjoyable to live with AMD , is inherently more flexible. Cheap and fun is a winning formula.

High-speed I/O within the motherboard is limited by the number of PCIe lanes available to the chipset and CPU. The primary PCIe slot you plug your graphics card into supports x16 speeds, but if you’re using multiple cards, you might drop the slot down to x8 or even x4, depending on the motherboard and CPU.The good news is that you probably don’t need to worry about these complexities fundamentalunless you plan to use an Nvidia SLI configuration with 3-4 graphics cards.

Standard Intel desktop processors have 16 lanes for one or two x16 PCIe slots, chipsets offer more. That seems like a lot until you remember that a graphics card itself uses up to 16 channels.

Fortunately, modern high-end chipsets like Intel’s Z690 are good enough to cover a variety of configurations like dual-GPU or bizarre M.2 configurations, and are a huge leap from the few available in the Haswell era. Note that the chipset-to-CPU link is only equivalent to four PCIe lanes, so if you’re running multiple high-speed devices outside of the chipset lanes, this becomes a potential bottleneck.

Intel’s X299 with Core i9 CPUs will give you 44 channels on Skylake-X CPUs like the i9 7900X and newer i9 9900X and later, plus another 24 channels from the chipset. (The earlier i7 7800X and i7 7820X were limited to 28 PCIe lanes from the CPU.) Keep in mind that while these lanes may be available from the chipset, some motherboards only provide a physical connector for a single x16 slot, running any Additional full x8 or slower length slot.

AMD splits the difference this generation with 24 lanes on the Ryzen (4 on the chipset) and a whopping 128 PCIe 4.0 lanes on the Threadripper pro. Most AM4 CPUs offer four PCIe lanes for a dedicated M.2 slot, which is a nice advantage for mainstream platforms.

The main takeaway here is that the performance drop from x16 to x8 is not noticeable in games and most workloads. If you really want to dive into PCIecheck out this video.

This covers the basics. Plan your build based on size and aesthetics, then choose the chipset that best suits your CPU and PC needs. Now that we’ve covered the basics, you can start shopping.